I've been making a lot of progress but work has been busy and its not looked like much has happened. I also haven't been very good at taking pictures unfortunately.

After primer and Zero Gloss White paint, I'm happy with the progress. Not pictured is the gloss clear coat I put on after to really make it pop.

Unfortunately the instructions included in the kit weren't accurate, so I had to re-mask some areas to put semi-gloss black on the interior bits. As I described earlier, I'm not using the right primer for this so had an issue where almost all the paint on the barge boards was removed

The last few days I've put primer and white back on so this should be good in a few days.

Also because I'm an actual idiot, I didn't do any test fitting with parts before painting. For some reason some of the parts have the attachment points removed, so I'm going to have to redo them. When I tried to do this two weekends ago it did not go well, and my pin vise went missing to help fix it. My task for the next few days is to get the front suspension test fit before I put the decals down.

I'll make sure for the next update I actually take a lot more pictures for everyone.

Nice work, Stewart. How are things in Rochy?

Thanks. Actually up in Auburn NY now but holding tight for the moment trying not to lose my mind with the stay at home order!

I'm clearly not too good at keeping up to date on this. I made some very rookie mistakes with this kit, hence the huge delays with updates. 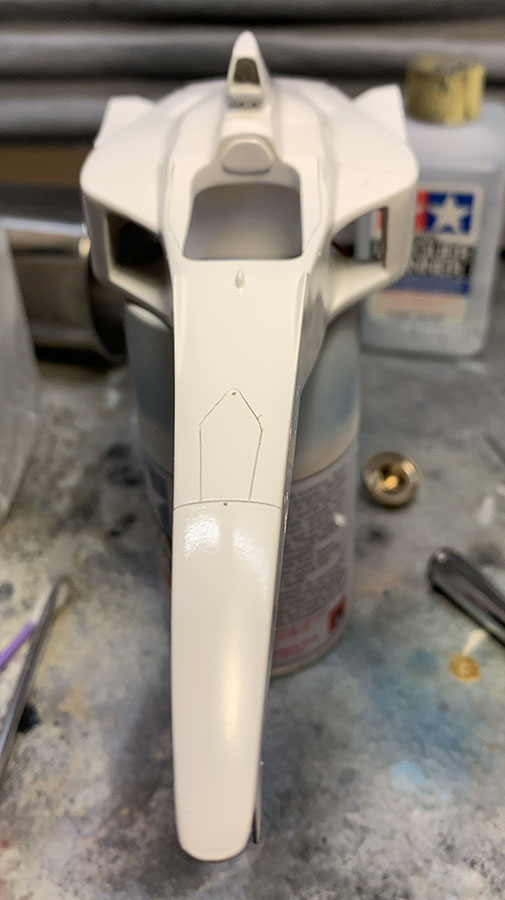 After painting Zero gloss white, I used some of the Tamiya panel thinner to bring out all the panels. I know its out of scale, but I think it looks pretty decent all in all, and certainly better than a simple white paint job. 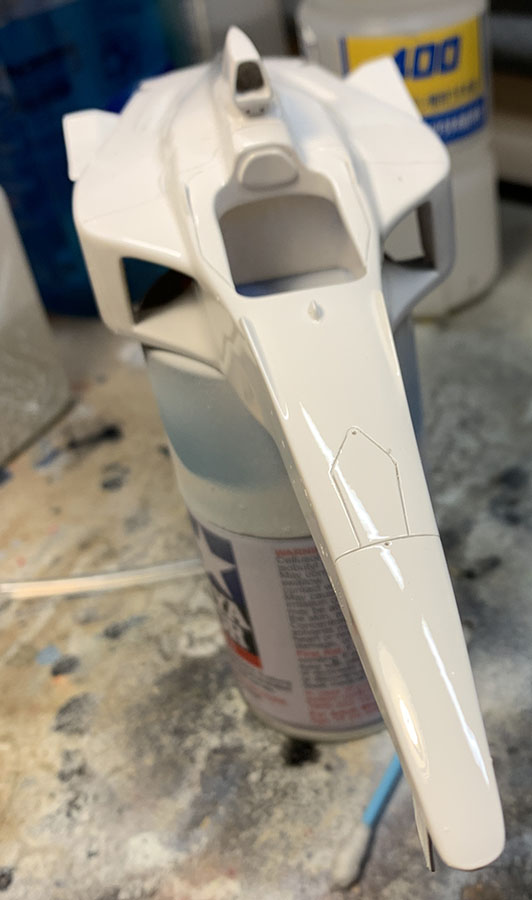 After Splash 2k clear I'm really happy with the sine. I've run into issues with polishing (either going through the clear coat or never properly removing scratches from previous polish) so decided to leave it as is. 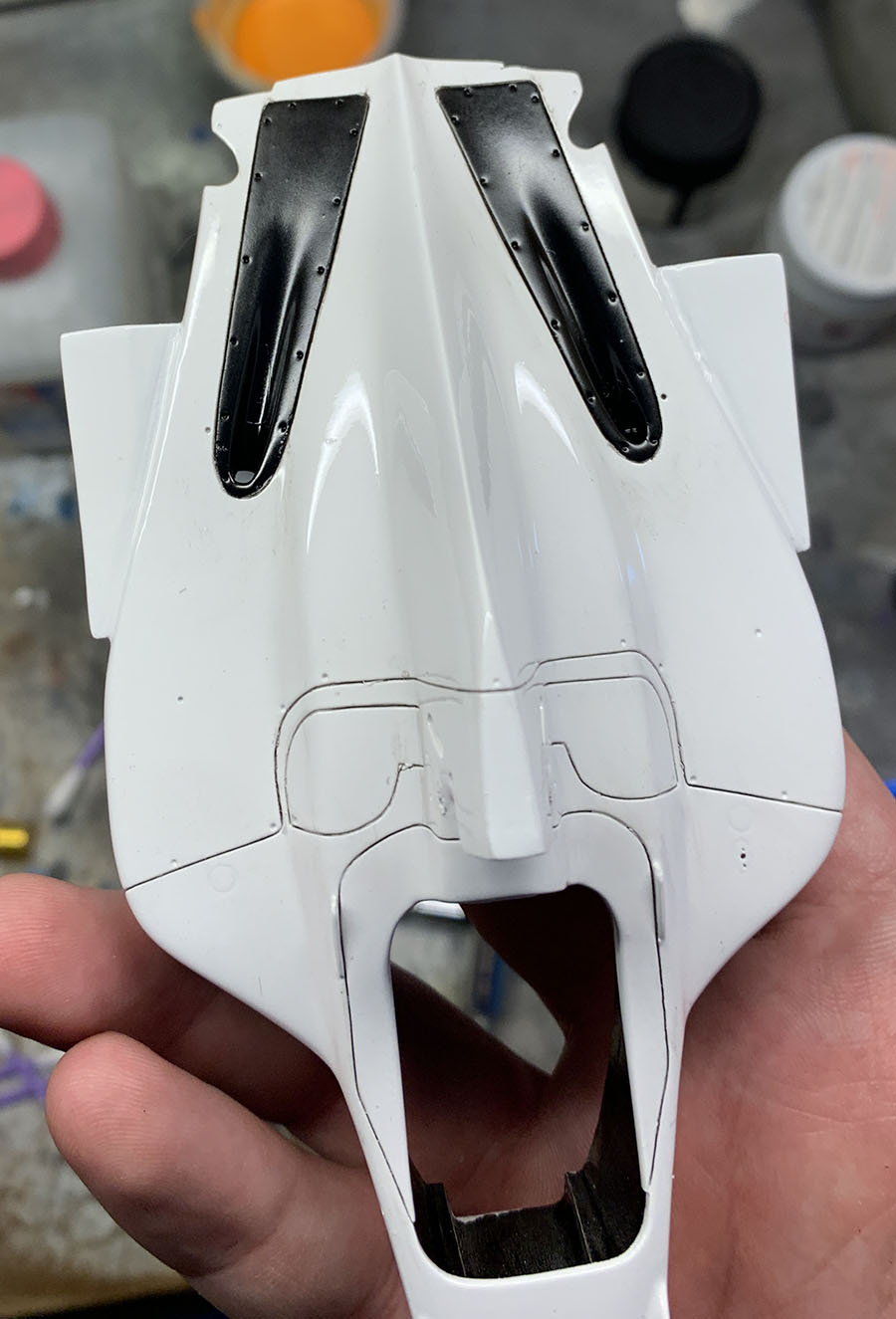 My favorite part of the kit, the huge exhaust protectors for the bodywork. After a few nightmares recently with tape pulling up clearcoat, I didn't have any issues...more on this later though. 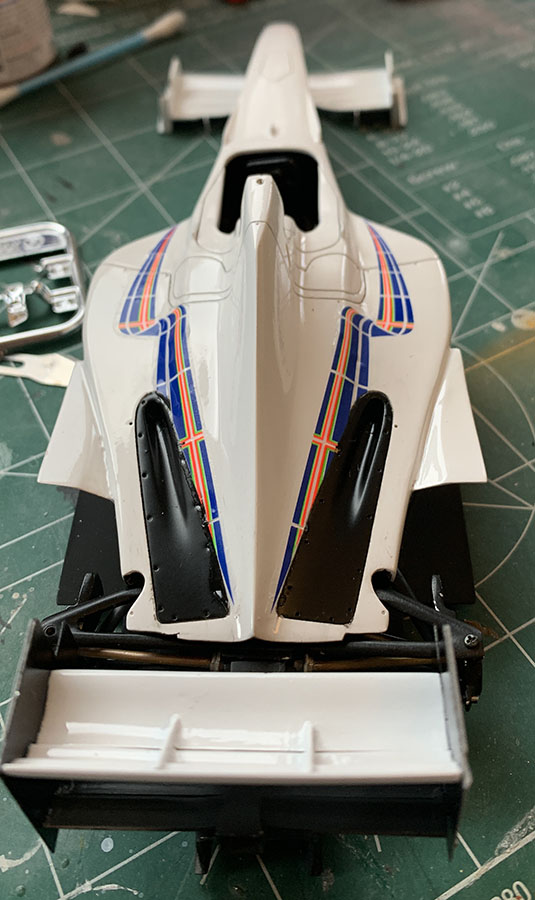 Jumped ahead a bit. The rear suspension was not easy to put together. One of the big issues I ran into with this kit was that a lot of the suspension pieces look so similar, and there aren't clear "do this then this"...its just "here is an F1 suspension, you figure it out". There also weren't clear ideas of where parts are supposed to connect together. I eventually got it going, before making a rather big mistake I'd have to deal with later.

For once, I didn't have many issues with the rear wing, although looking at it now I wish I had put a flat coat on the bottom part of the wing.

The decals were absolutely great. They have a correct semigloss finish as well as being super thin. For something that is 21 years old, I couldn't be happier with how they reacted. 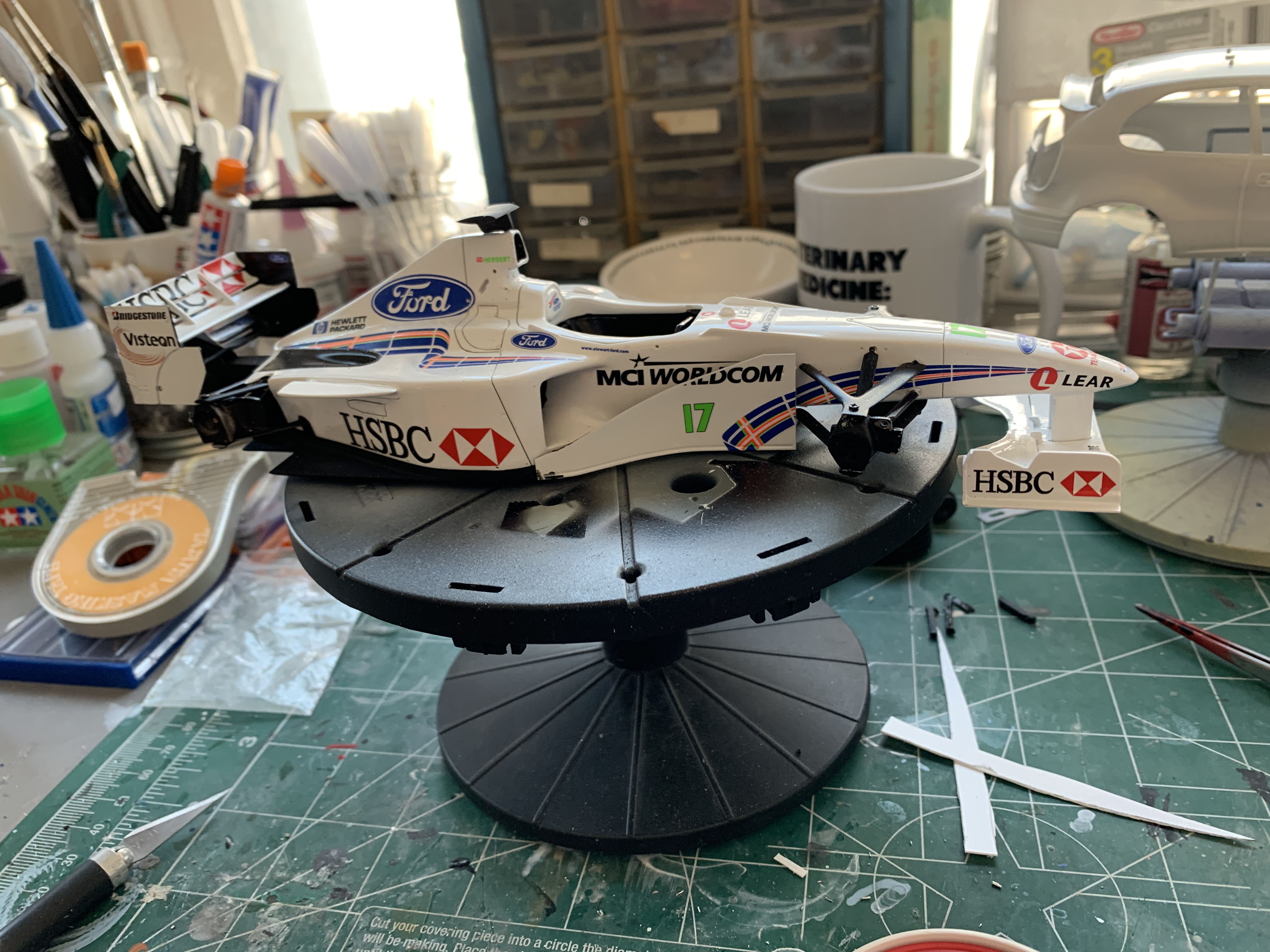 Skipped a lot of steps here too! The bottom keel was pretty easy to get on, but the push rods were a huge pain. It took me a lot of work to realize where I had made the grave error earlier. I incorrectly used the front pushrods on the rear! At this point, as the issues continue to mount, I sometimes hit the point where I just "need to get it done", and this was that point. I essentially hacked the push rod to make them work in the car. Eventually I made something which worked. Part of the delays too were in getting a drill set as I had to make my own mounting pins for the front wish bones, which likely would have helped with the rear of the cars.

The barge boards were a nightmare. I'm quite happy with the bend I got on them, but I had a lot of problems with not having etching primer. At two points I managed to fully pull the paint off with the masking tape. Being in the middle of the stay at home orders, I couldn't do much at this point other than hold off on the kit for the next few months. My final fix was simply to hand paint the back of the barge board to avoid the masking issue.

After getting the painting issues out of the way, I then had the problem of actually mounting them. Each board has 3 PE pieces used to mount it, but the location of where to put them is a bit difficult. Its also highly dependent on the angles of the barge boards, which at this point I couldn't justify fixing in fear of breaking the decals. I eventually was able to get them to stay on the car (after fully breaking the front suspension off once) it stayed on. I did lose a bit of the corner of one that I missed until looking at these pictures.

And now its complete! I'm overall very happy with the end result, and that after building models for 20 years, I finally made the decision to just go out and try it. I learned a ton and know what I need next time. As you can see, the rear wheels are way too bg for the tires, but by this point I had decided not to attempt to fix it. 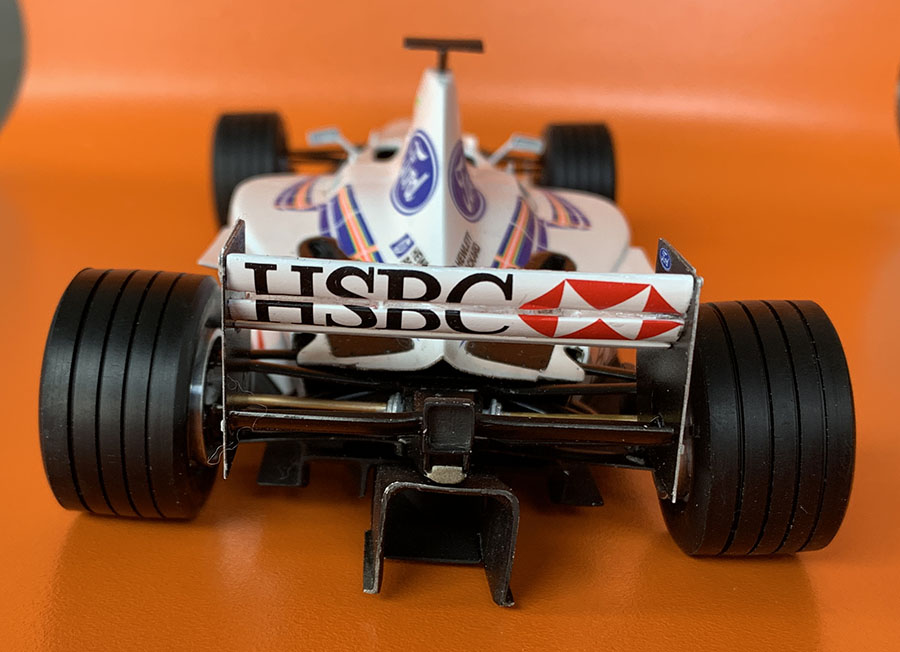 You can really see the rear wheels and how huge they are. The car does actually sit flat which was another one of my huge concerns. 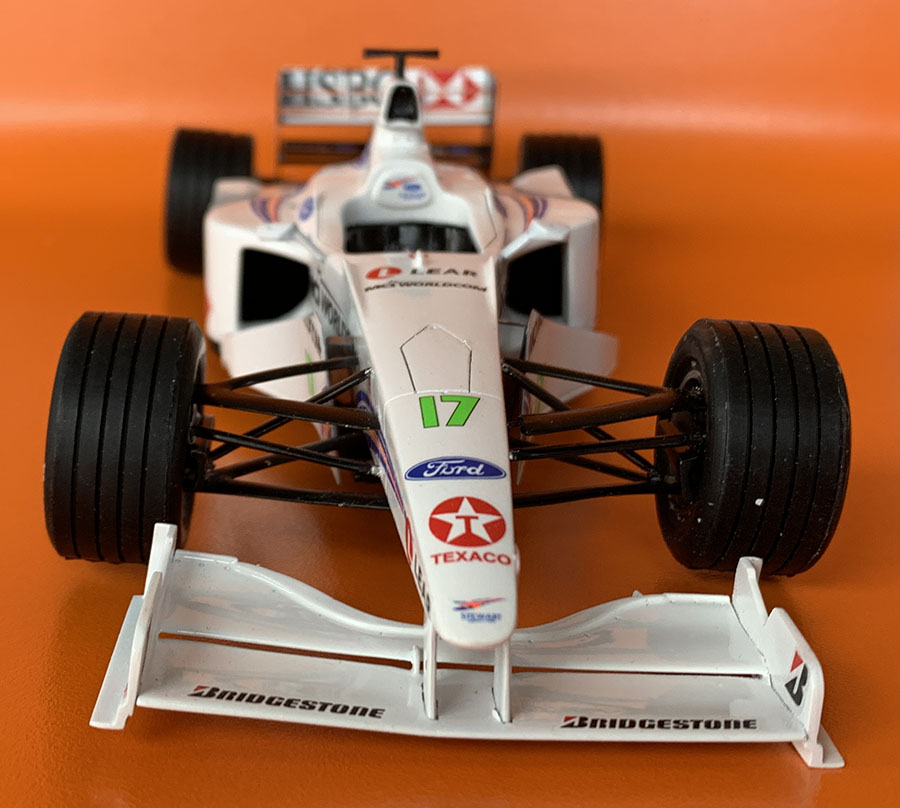 This is my only real regret of the kit. When I started the kit, I knew the front wing was bent, but it wasn't clear until it was mounted how bad it was. I couldn't really do a ton with what I knew at the time because the attempts to strengthen it resulted in a huge CRACK noise. I was nervous I was going to fully break the wing, so rather than look into how to fix it I assumed it would be OK. It wasn't really, but from a distance it doesn't look terrible. 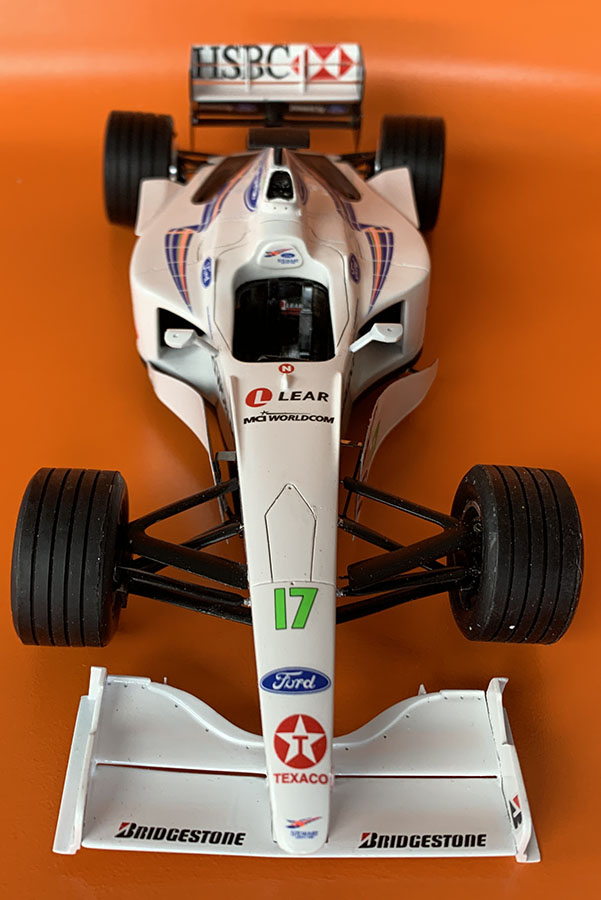 Another lesson in making sure everything fits early on and you use the right drill bit. I used a slightly too large one but at that point there wasn't much I could do. I also misread the instructions early on, so I thought there was a decal for the blue headrest, but in reality they want you to paint it. By the time I realized that it was too late. Whats funny is that I actually HAVE the headrest padding for this car, so I should have paid more attention. 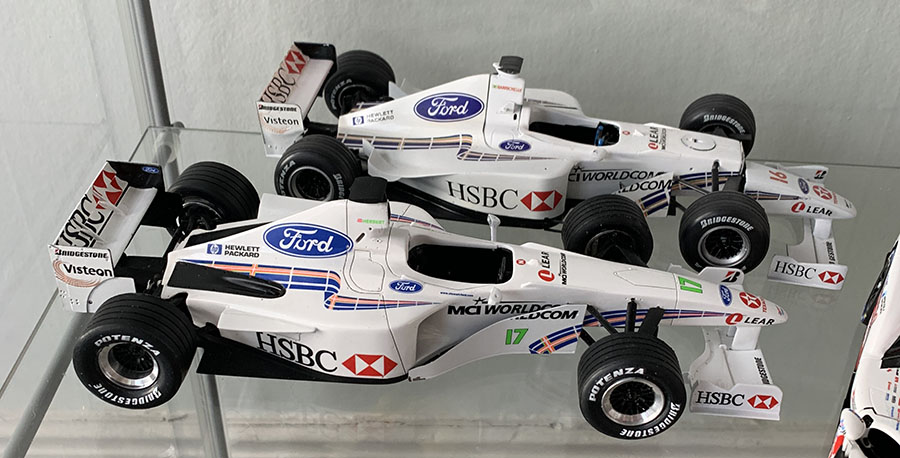 And finally, about 5 years ago I completed a conversion build of a MP4/13 with a F2000 rear wing, and I'm happy with the differences you can see in the build quality, even if I'm not at the point I want to be at yet.

And it always amazes me how much an F1 build comes alive when the decals go on! Nice job they were a simple scheme but still made a statement...pure JYS.
Cheers,
Shayne
http://motorsportmodeller.blogspot.com.au/

Just wondering where you sourced the decal for your MP4/13 -> SF3 conversion?
Visit my personal page: http://www.wilchan.com

wilchan
Best of the Rest

There are currently 12 users online.