JamesB wrote:I'd specially listen to the former owner (Lezdep) as he surely nows what's on the car

Surprisingly even I don't know, as I've got it from Japanese auction like that - already painted. I just
have had good experience with 91%-99% isopropyl alcohols in the past. It's my tool of choice for paint removal
when it comes to resin and metal. Works on plastic for me as well, but should not leave plastic in it for long.
Plastic become brittle after long time in it.
Sergey's Blog - http://lezdep.blogspot.com/ | Public Gallery - http://picasaweb.google.com/lezdep

I wouldn’t use lacquer thinner. Oven Cleaner (Easy Bake) will strip anything off resin (or even plastic) and not damage it. Coat the part in oven cleaner, let it soak, and clean with dish soap and old toothbrush in warm water. Repeat as necessary. Remember to use latex gloves.

Already tried ezbake oven cleaner and it didn’t work too great. Using the plastic tool is working reasonably well, but I gotta get a container and some extra 91% alcohol tomorrow.

Interesting- never had an issue with oven cleaner. Sometimes I will let it “soak” overnight and that works better. I have had almost no luck with brake fluid, so over cleaner is my go to paint stripper.

Think I win the award for most posts in a WIP without any pics.

After a bit in brake fluid, I wasn't getting anywhere.

91% alcohol was the answer. Within about an hour it was coming off very quickly. The only slight problem was it also attacked the glue and whilst cleaning the white metal for the roll over hoop went down the drain! I was able to stop it before it went through the pipes though so that was a disaster averted. 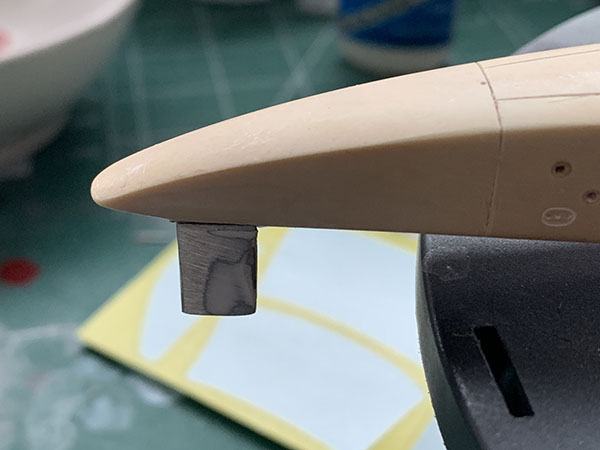 There was a fair amount of a gap on several parts. I puttied it up but would eventually have some issues.

After the first coat the car was still pretty yellow.

And there was a big gap on the flip ups. At least the front wing mount and airbox was in good shape! This is actually the better side too.

After the second coat the white primer was looking a lot better. 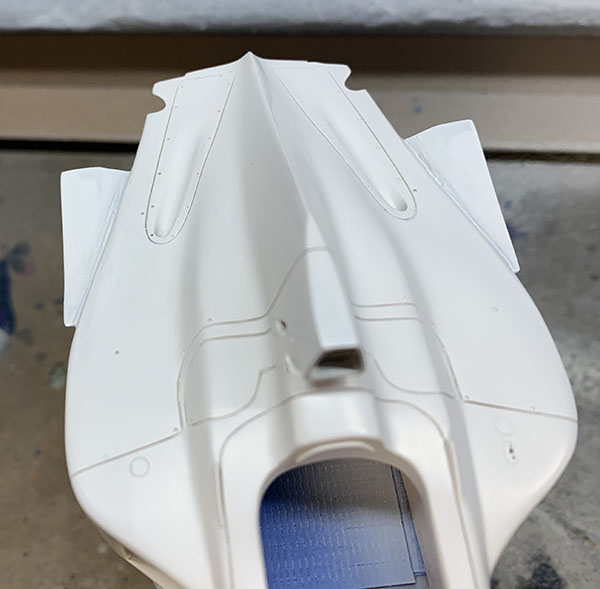 The flip ups also look better. Its not perfect, but it isn't as terrible as before. I'm going to spray some more this afternoon as well as get on the bottom of the body.

Not pictured is the rest of the car parts being primered as well. The biggest area I have some concerns about is the barge boards. I need to manage some complex curves with them, and I'm not exactly sure how to do that. I started to primer the flat piece...but obviously that isn't going to work with the curves I need to make. Any tips are appreciated.

stubeck wrote:Think I win the award for most posts in a WIP without any pics.

No, there is someone else with the biggest monoloque i`ve ever seen around which is very hard to beat!

Anyway, good progress on it!

If you use a primer from Tamiya be prepared that it will not hold well .especially on metal parts.

This is Mr Hobby primer, I know its not perfect but it seems to be working fairly decently.

I always make my first coat of primer using Halfords grey primer. UK automotive spray in a rattle can. Seals everything in, adheres to resin and metal and the grey gives a good uniform coverage. Then apply 2 more white coats of primer. It covers really well over the grey and gives a lovely strong white to start with proper colour coats.
Gets rid of any bleed thru on red plastic too.

stubeck wrote:This is Mr Hobby primer, I know its not perfect but it seems to be working fairly decently.

I use this
You do not have the required permissions to view the files attached to this post.

There are currently 6 users online.