After many years without building a plastic kit i decided to do one again, the Tamiya Lotus 99T was chosen cause i like the 80`s and 90`s cars a lot.
I will build it as open version, without cowling and wheels on, seat and stearing wheel will be seperated too.
Some aftermarket stuff like the Studio27 etch set will find it`s place as well as some Top Studio stuff too, trying to upgrade this kit a little bit.
First of is cleaning parts, as it is an older kit, there are a lot of sinking marks and parting lines to be removed, so lot of sanding, putty and primerjobs needs to be done.
Some scratch build parts will be done and some changes on kit parts are needed to make this kit less toyish.
Fighting with the camera actually, some pics are ok, but lots are not to be used. Have to test a bit what`s going on, so sorry for some bad pictures, still trying to come up with better ones.
Starting with a new cockpit i scratch build from styrene, it takes a few hours to take mesurements and create the new parts and make sure they will fit, so here is a short layout of what i`ve done so far. 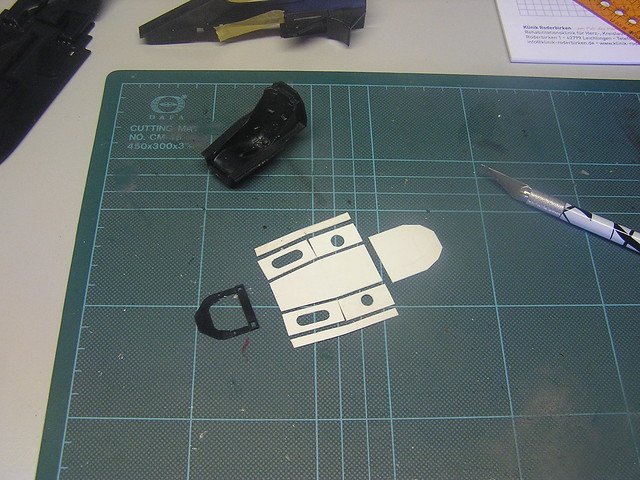 New parts glued together, but i made a small mistake when checking references again and again, the small part inside glued in an 45° angle has to be removed again, it does not exist in the real car. I added some structure to the back of the cockpit where seatbelts will be fixed later. 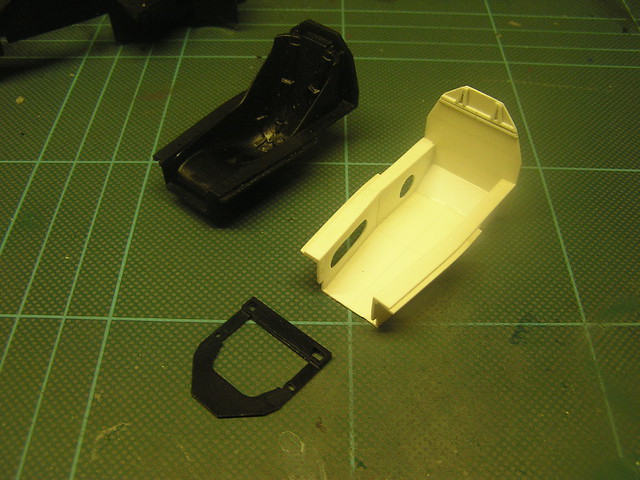 The small part is removed, holes are drilled and the section became a semi gloss black finish as base for CF decals. Dashboard is cleaned from molded switches, they will be replaced later. 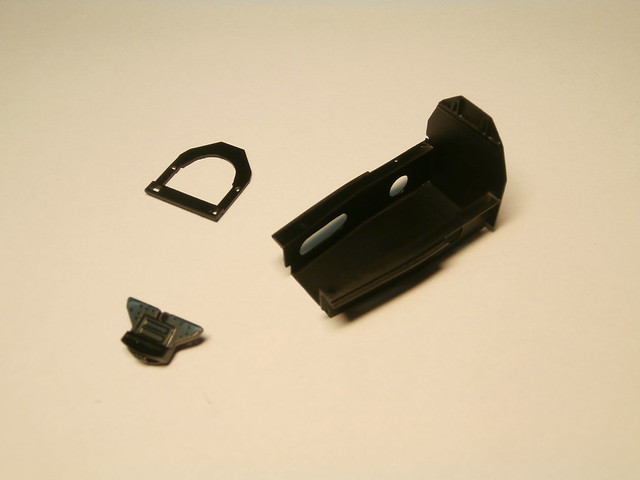 The seat was seperated from cockpit section, molded in seatbelts are removed and openings for new ones are cutted. Lot of sanding, putty and primertime to get a smooth surface. 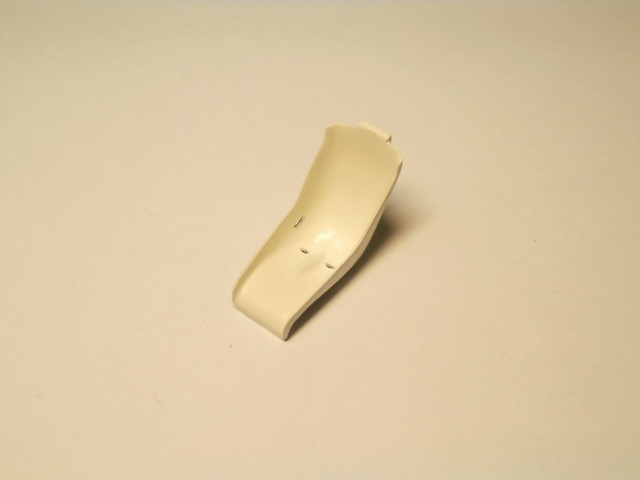 I sanded of the molded rivets and drilled holes in position, some details on top of chassis are drilled out, they will be replaced later with scratch build parts. 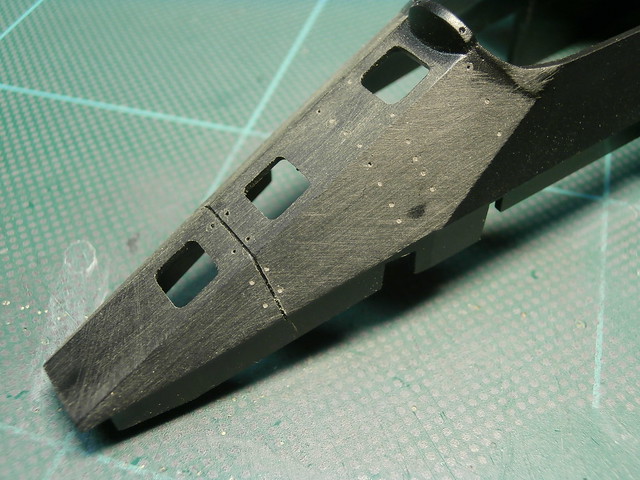 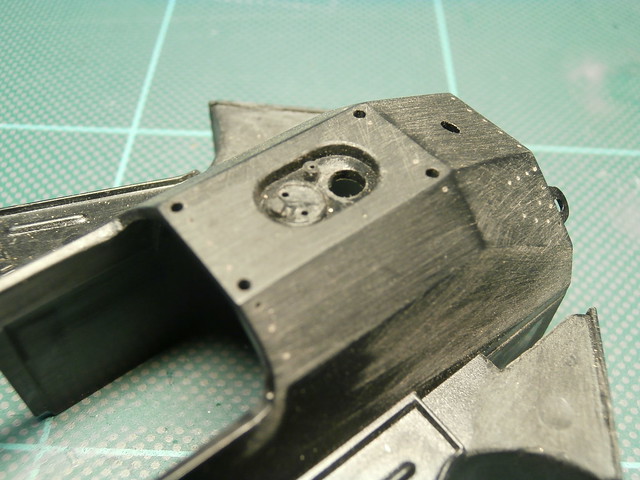 I removed some fixing points on the inside of the cockpit, scratch build a part where the breakfluid reservoirs will be attached. 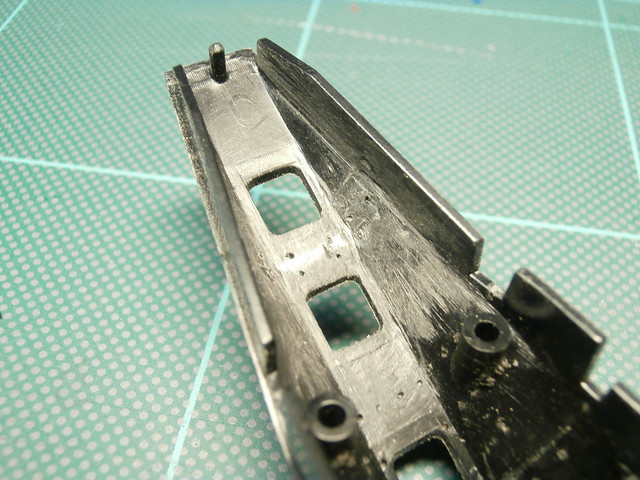 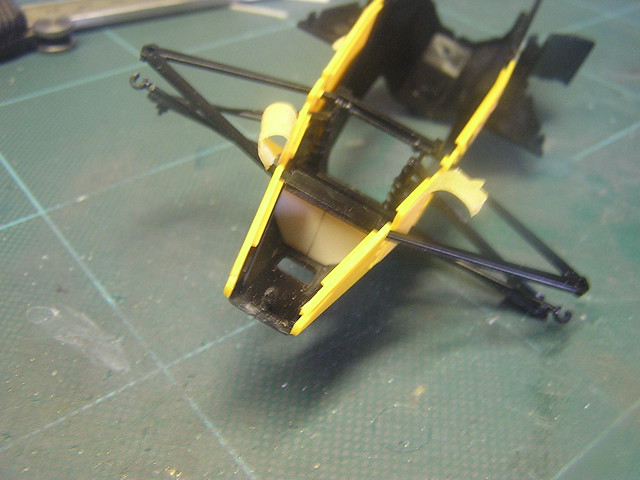 Here you can see how old this kit is, heavy shrinking marks on the undertray which needs putty and sanding, kit fixing holes for the cowling are closed as they don`t appear in reality. 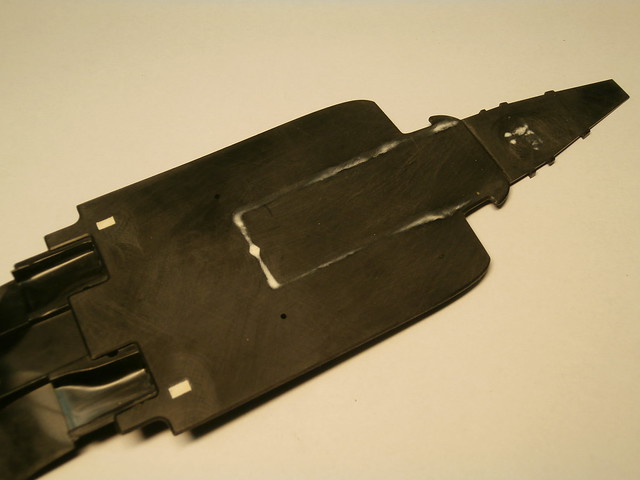 I glued the sidepods to the cowling and again heavy sanding, putty and a first coat of primer to check the surface, needs some additional touch up. 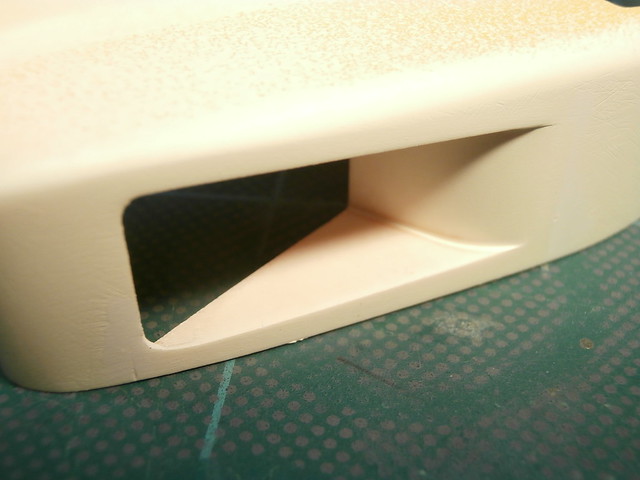 Molded in rivets on the side panels are removed and drilled, first coat of primer applied and sanded. Ready to recieve the edged rivets. 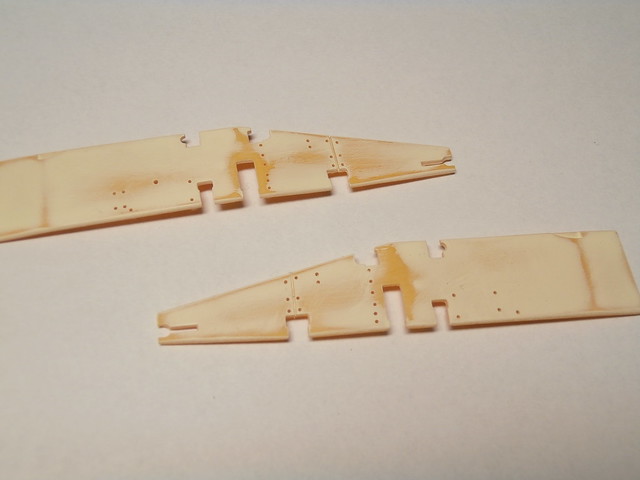 Now on to suspension parts which needs modifications, i will change the molded dumpers against Top Studio parts, so i had to cut them of. The left side shows the original kit version, on the right a new reated dumper, the lower fixing point needs more modification but first the dumper linkage is opened roughly with a dentist mill. 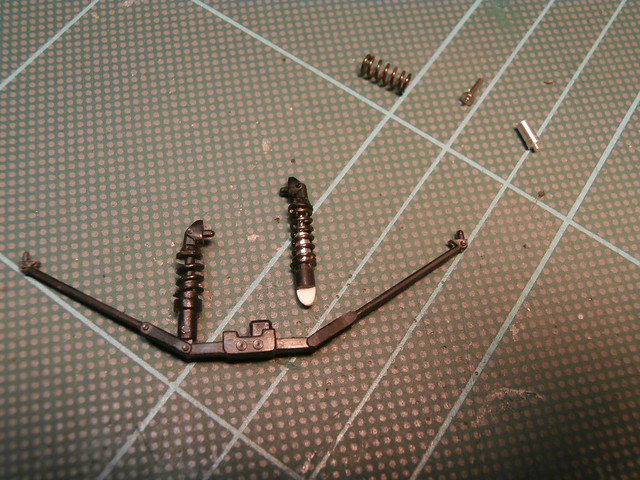 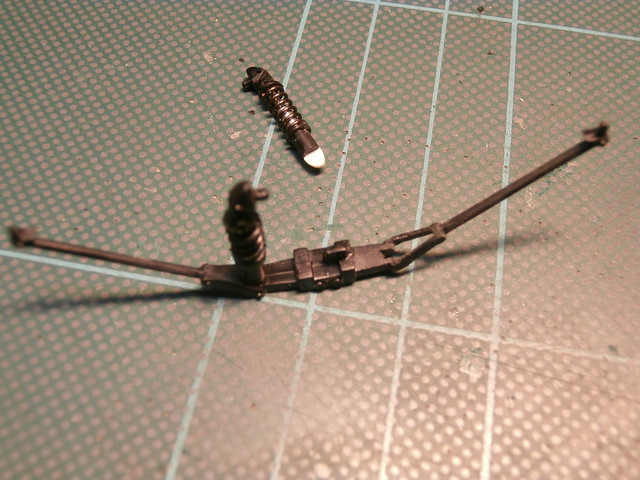 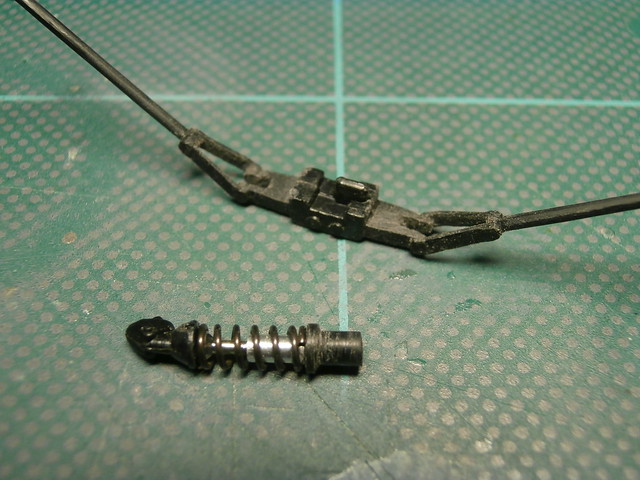 Still have to do the same on the front suspension, i don`t like the look of the kit part. 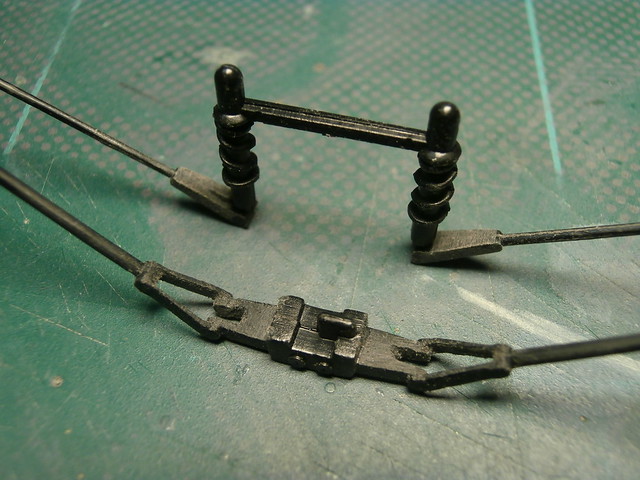 So not much real progress instead of cleaning, sanding and more sanding actually. Some parts have their first coat of colour to move on with CF work, but i will clean up everything before i go on with decals.

I love these build threads where parts in a kit become small building projects in it's own right.

How do you make coil springs? I assume you made them?

Nice start! Lots of work to come without a doubt

Thank you guys for nice commends, appriciate it!

I love these build threads where parts in a kit become small building projects in it's own right.

How do you make coil springs? I assume you made them?

I like such things too and as the kit contains not realy much parts some additional stuff is needed.
No this time i used the Top Studio parts for the shock absorbers, it comes with coils and they fit perfect. Normaly when doing them on my own i winde a copper or brass wire around a drill bit with correct dimensions, example you need a 4mm thick coil, using 1mm wire means a 2mm drill bit. After winding you can stretch it and cut to size, that`s the way i do it normaly.

jaykay wrote:Nice start! Lots of work to come without a doubt

Yes, some parts are realy time consuming to be done, but i enjoy this build so far, even when it took me 5 hours to figure out a shifting linkage yesterday. CF work will be a lot too, so my plan to finish it up this year might be a little bit optimistic!

My camera makes trouble too, does not work correctly in macro modus, don`t understand why, i hope i can fix this!

This is great, the end result will be spectacular, I'm sure

Jeff wrote:This is great, the end result will be spectacular, I'm sure

Thank you very much Jeff

Here is what i have done so far, some work on the Turbo intakes, the kit parts needed to be changed, lower intake is removed and fixing points are removed. Primer is shot and now they are ready for paint. 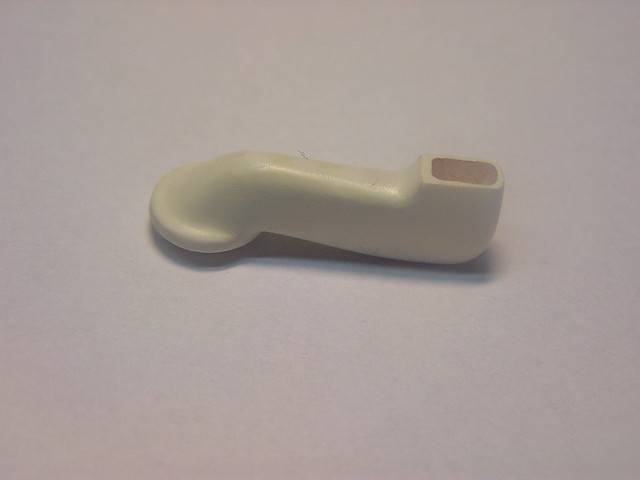 I changed the front shock absorbers too, again Top Studio parts, cut off the linkage and rebuild it from scratch. I`m not realy happy with the look, too big finaly, i think i have to do another set as i don`t like these parts. 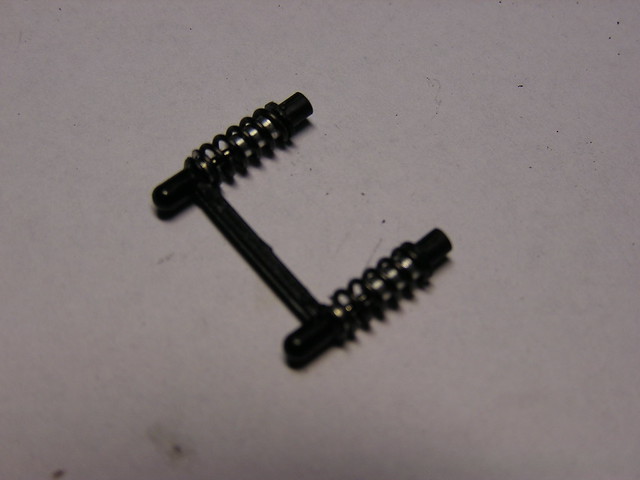 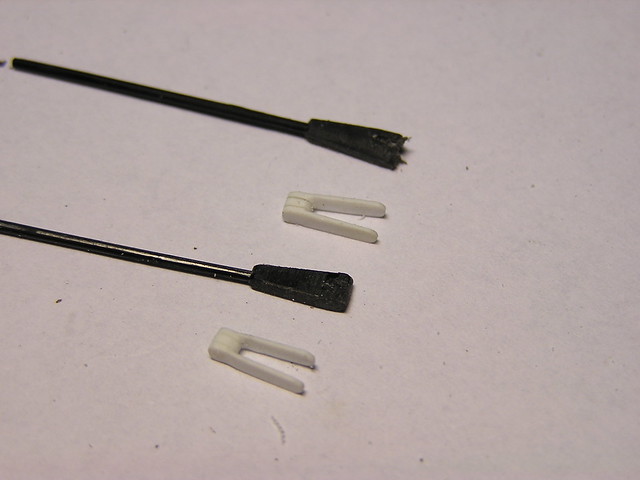 I made the middle buckelhead and added it to the front suspension, maybe i will add the steering to it if it will be visible, many details will be lost once installed to the model like the shock absorbers too. 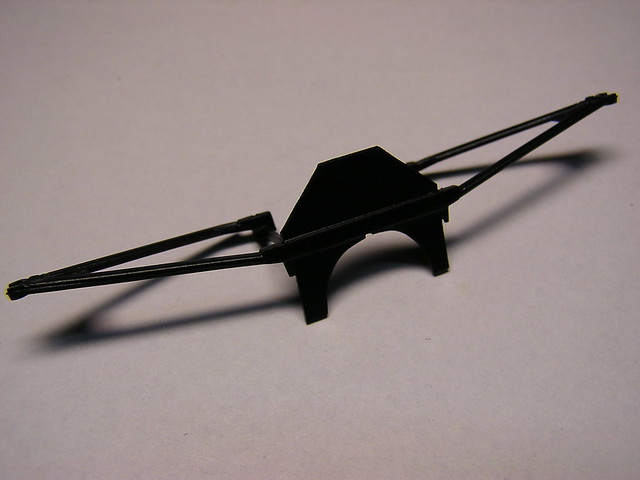 Now on to the shifting linkage which is missing in the kit. Have to scratch build a mounting bracket to the cam cover as routing guide, it took me hours to find the right dimensions and the correct position, lot of test fitting was needed and several tries to get it done finaly, used a needle to check out if the exaust is fitting and the linkage is alligned well. The rest of the linkage will be done when parts are glued together, finaly length is not clear at moment so i hold on with it. Holes for ignition wires are drilled to the cam covers and molded in rivets are cut off to be replaced with etched ones. 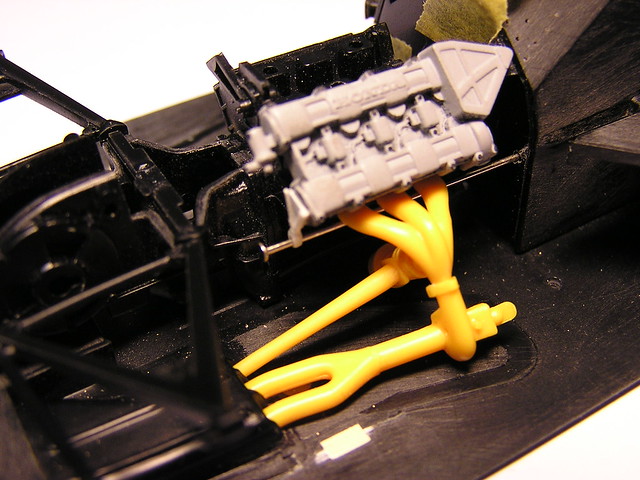 I scratch build some radiator piping, painted it black as base for allclad. 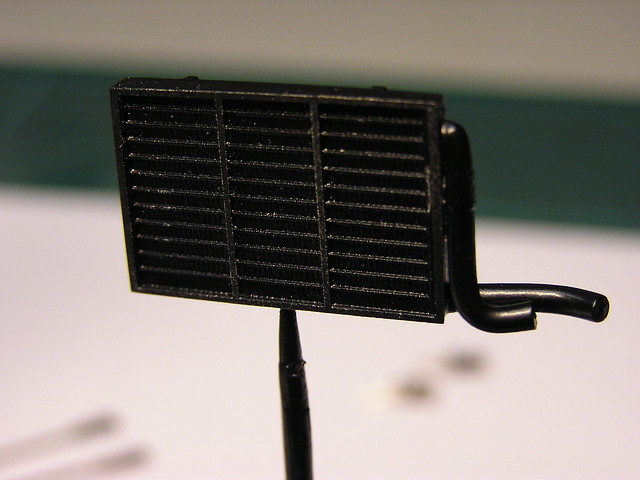 Some modification on the roll bar is done too, a fixing point for antenna and a square bar is attached, painted black and ready for allclad too. 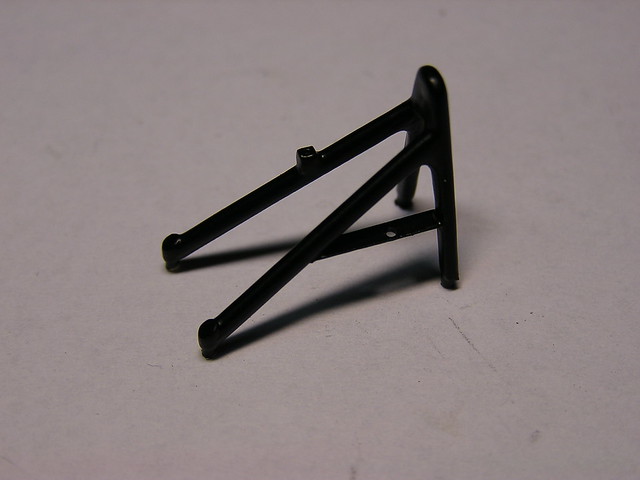 I detailed the kit electronic boxes with Top Studio brass connectors, Hobby Design connector and some tiny badges, scratch build anther 2 as i removed them from the chassis. An oxygen bottle for the cockpit is done. I could not find that bottle in the MFH instructions for the 1:12 model, but references showed it clearly. 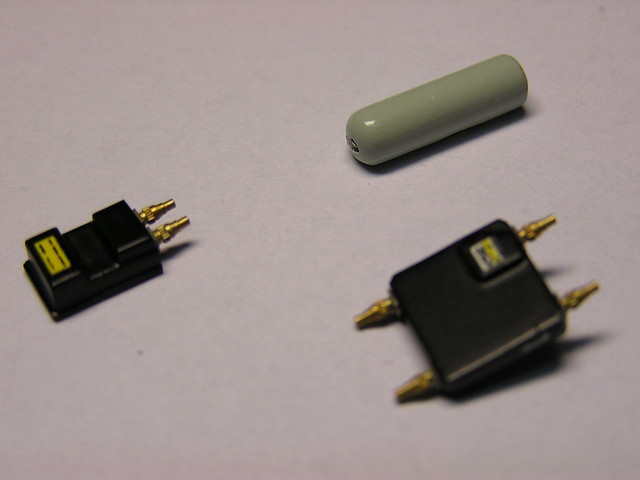 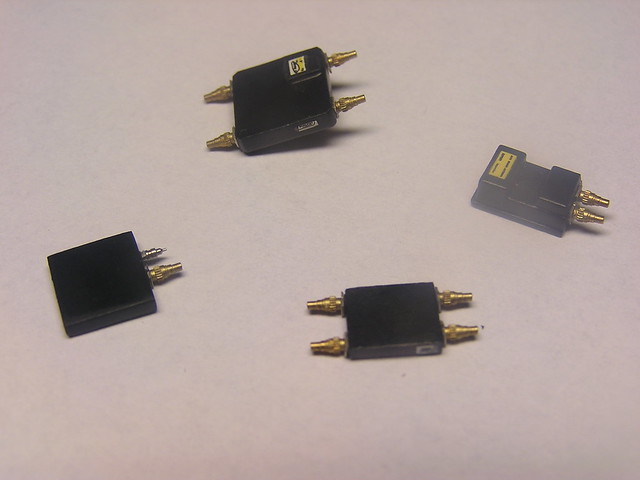 Next i glued the top of the gear box to the engine and realized a hugh gap between the parts, filled it with disolved putty. The suspension points are modified to add the suspension after painting, drilled holes and added a pin to the suspension arms. 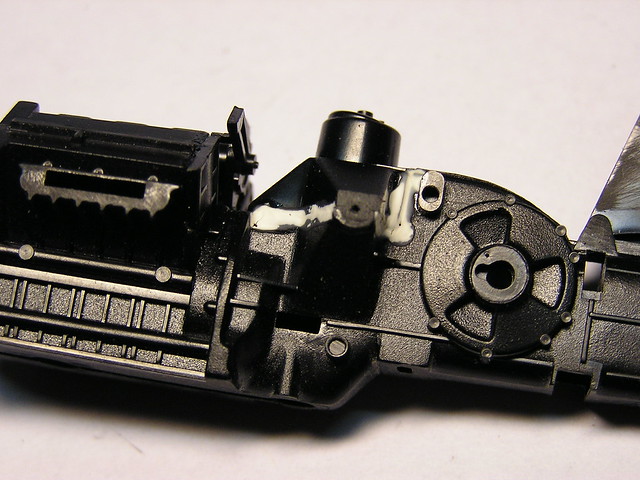 I scratch build some brake fluid reservoirs, glued it to the front buckle head and painted everything semi gloss black. Fluid lines will be added later, some hand painting has to be done too. 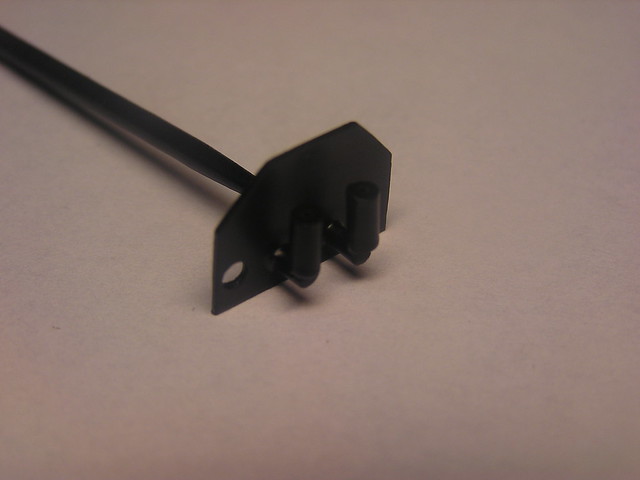 Things are moving on slowly, but it`s the same to everyone when starting with a model.
Thank`s for watching and a nice weekend to everyone!

Liking this a lot. Some really nice detailing.

Many thank`s daveyman, appriciate it!

But be aware MFH have just released this Lotus 99 in 1/20. It is a scaled-down 1/12 kit and I could image you will get a super kit out-of-the-box.
Br
Allan

Thank you for this information Allen, looking forward to it, maybe i catch one up to do another version as there are differences between the early version and the later one.

There are currently 14 users online.