Hi everyone!
Well after a full TEN odd years I'm finally posting another WIP, and I must admit I'm feeling pretty good about it! After a rather significant break from building I'm finally picking up my (MANY) half-finished kits and burning through them to get them completed and on the display shelf. I've also been lurking on the forums more consistently over the past year or so and it's great to see a few familiar names still going strong!

So, the Modeler's Jordan... as with so many other kits I've started I hit a snag that potentially set me back some weeks/months and caused me to shelve it in frustration (at least I didn't boomerang the damn thing!). That was literally ten years ago. Here's some shots of the progress being made prior to putting it back in the box for a decade...

The box (I paid more for it than what that price tag says though...) and some Zero Paints. I could only get the J198 yellow at the time as there was no J199 version available. It's extremely close though and I've already painted a lot of the parts so I'm not going to change colours now even though the J199 yellow is available. 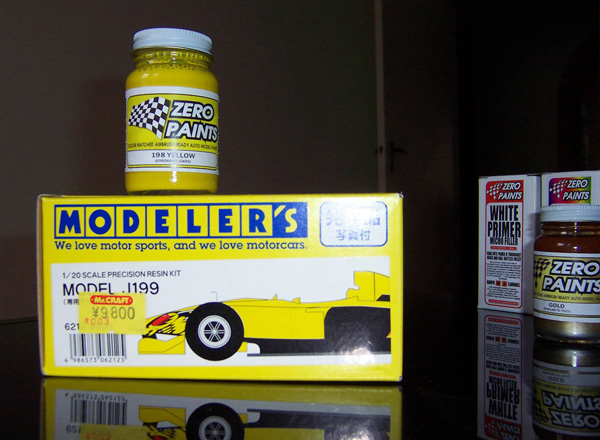 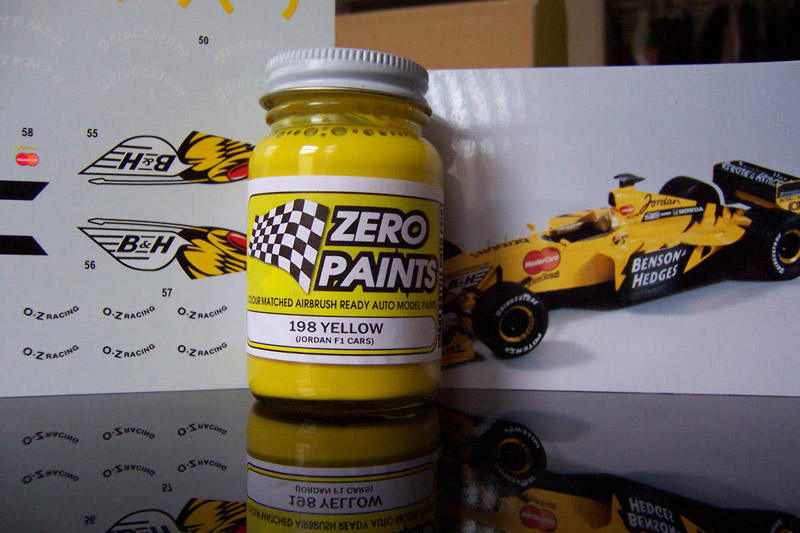 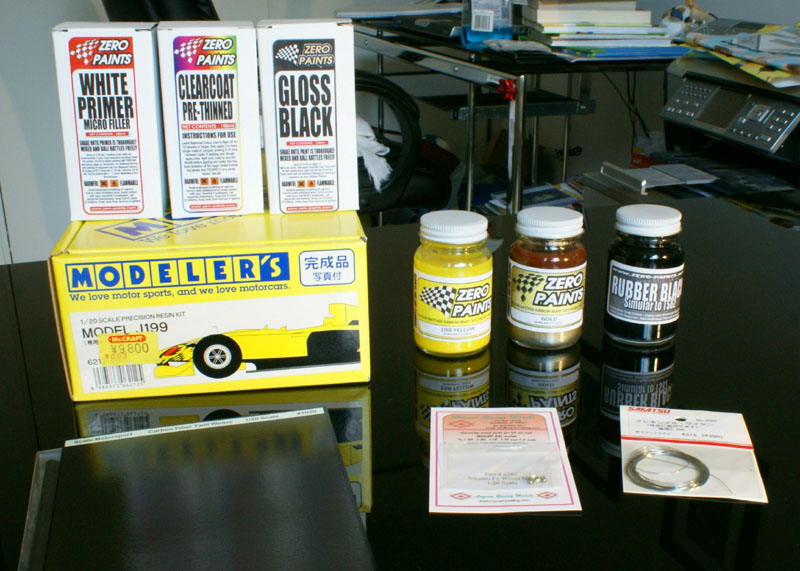 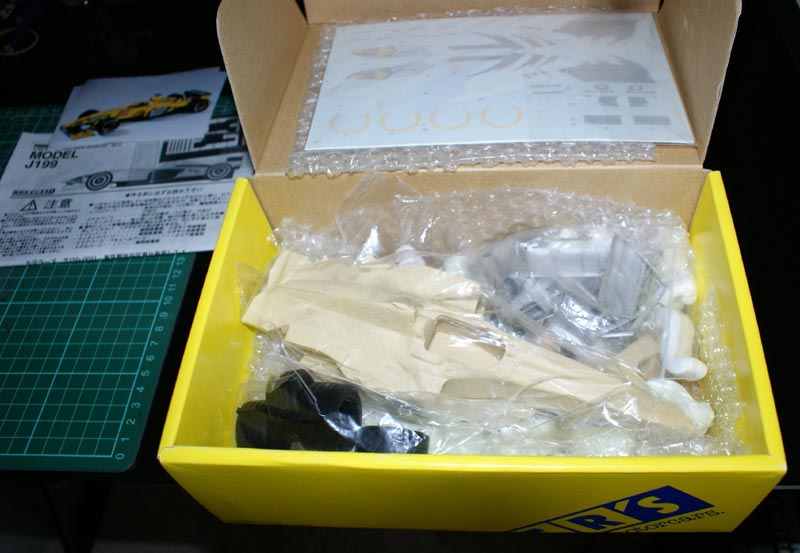 Getting rid of excess molding, initial painting, and applying carbon fiber decals to the floor including some mongrel pieces that just wouldn't take properly... 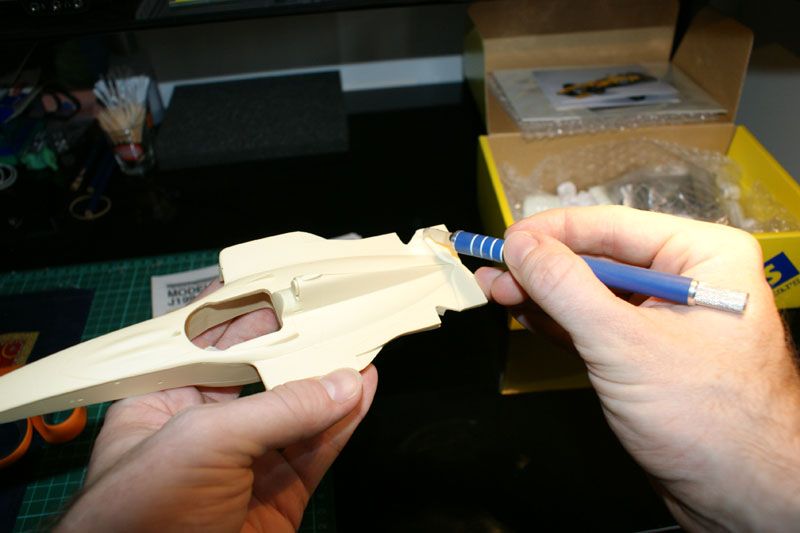 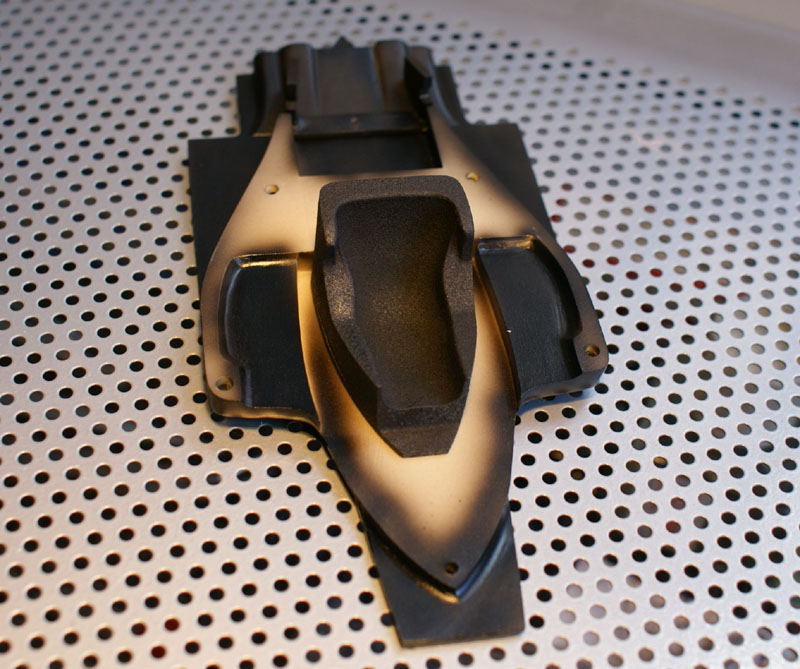 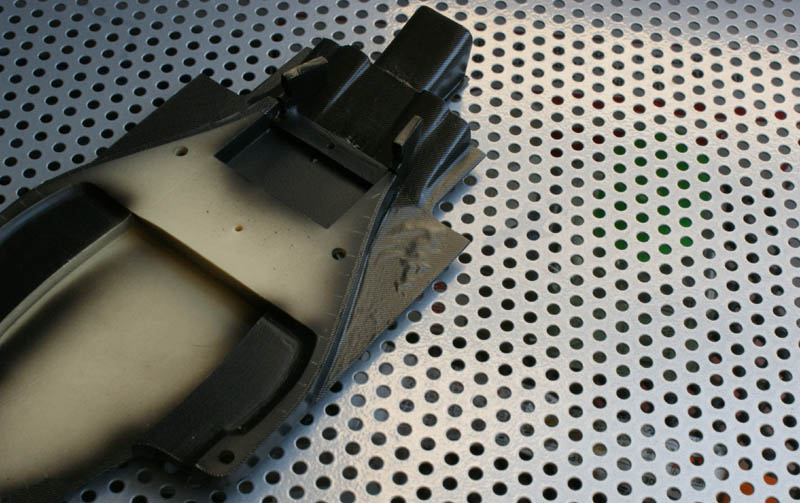 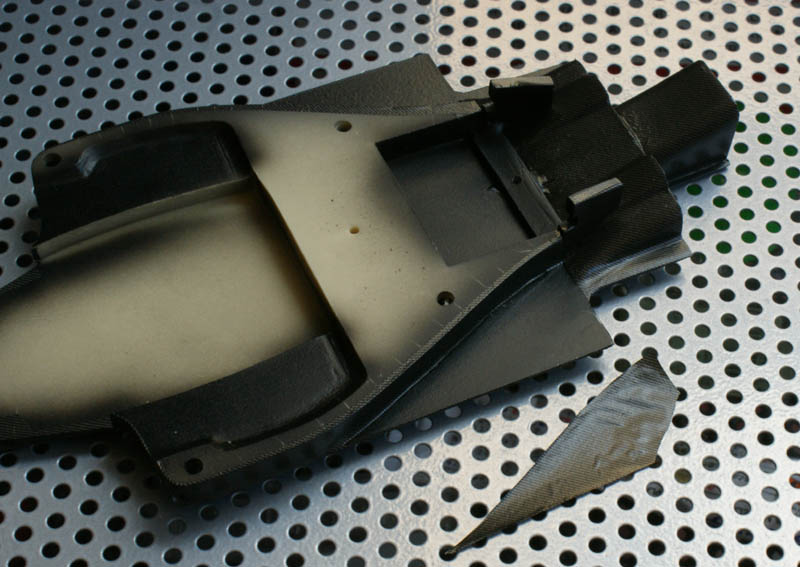 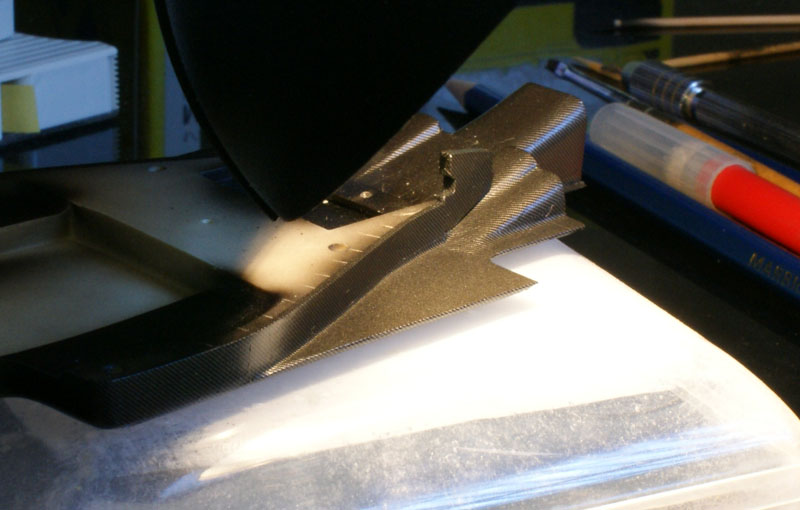 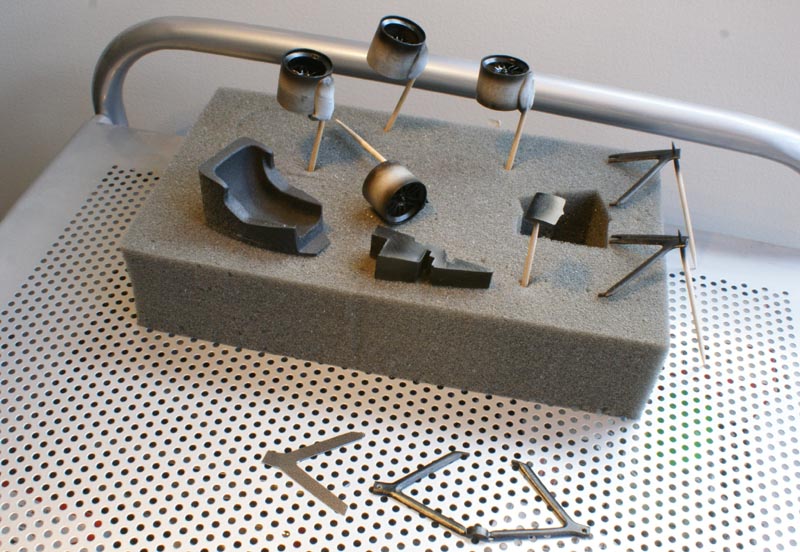 The body finally getting some attention, lots of minor filling, priming and sanding, and the black under the nose going on, and going on extremely well (makes a nice change when things just 'work'...!) 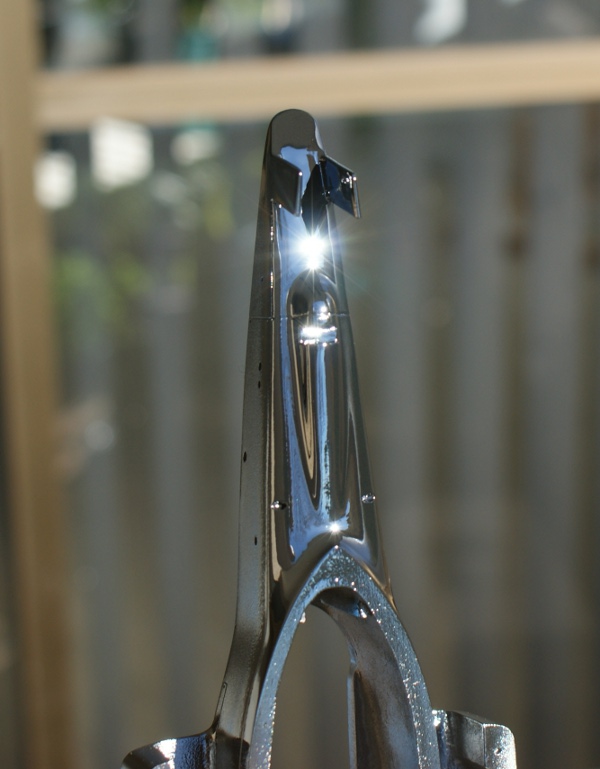 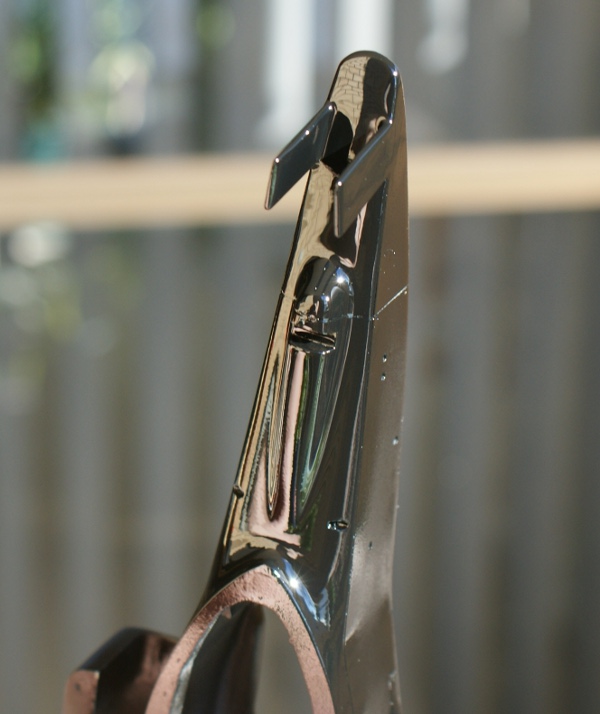 And then the issue that caused me to shelve the darn thing... I must admit that working on it up to this point was a bit of a chore and this was essentially the last straw. Admittedly also, ten years ago I was way too serious about my builds and trying to perfect EVERYTHING. These days I'm just happy to be building, don't care about perfection as long as the finished model looks good, and it's a much more enjoyable experience all round. In fact I haven't felt the need to frisbee a model for quite a while!

Here's the offending problem and the start of the latest progress pics - I found the primer/paint on the body started to lift in about five different section of the car after I was well into applying the yellow top coat, and below you can see one of these sections, as well as the top of the engine cover where another of the lifted sections had been sanded back... 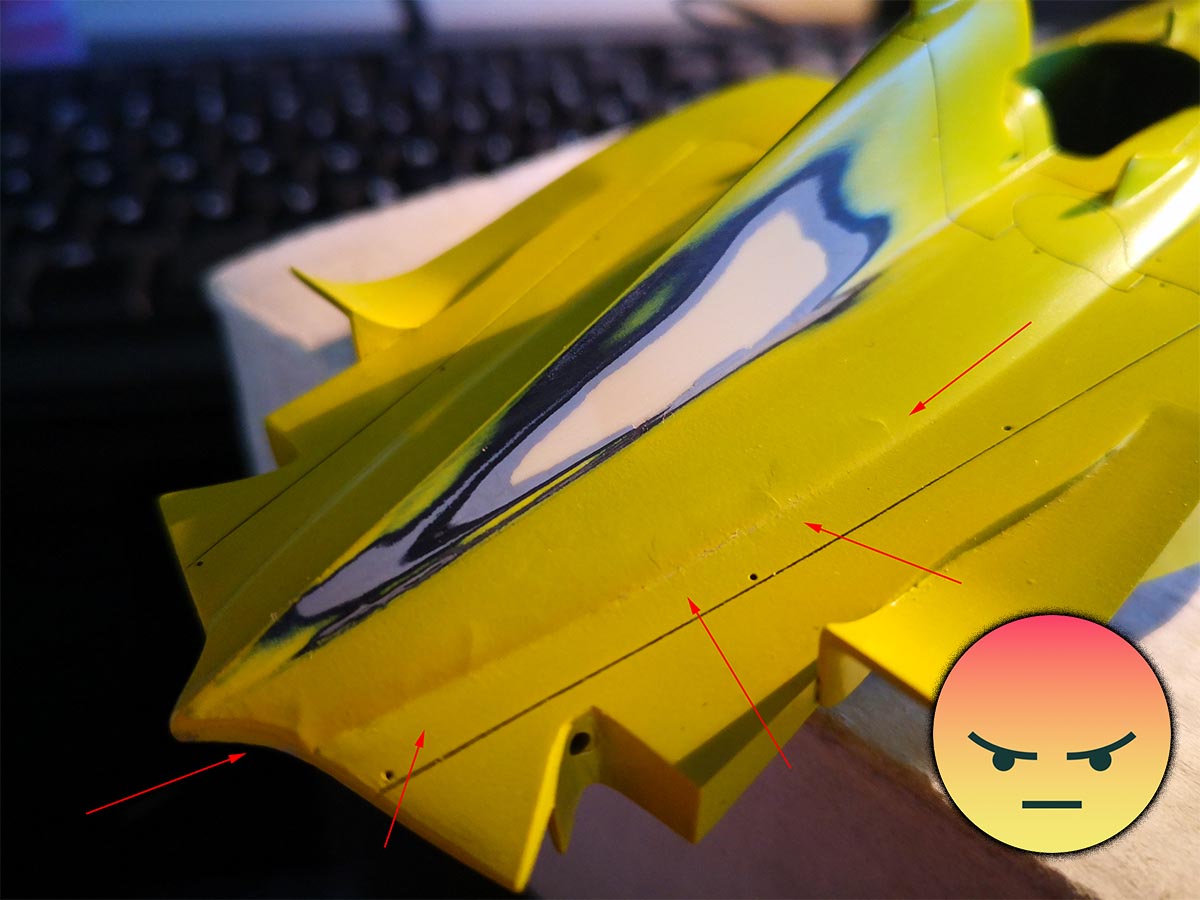 After having ten years to get over the annoyance of the lifting paint (I'm only JUST over it dammit!), and while work to fix this was underway, I kept going on the suspension, brakes and other odds and ends... 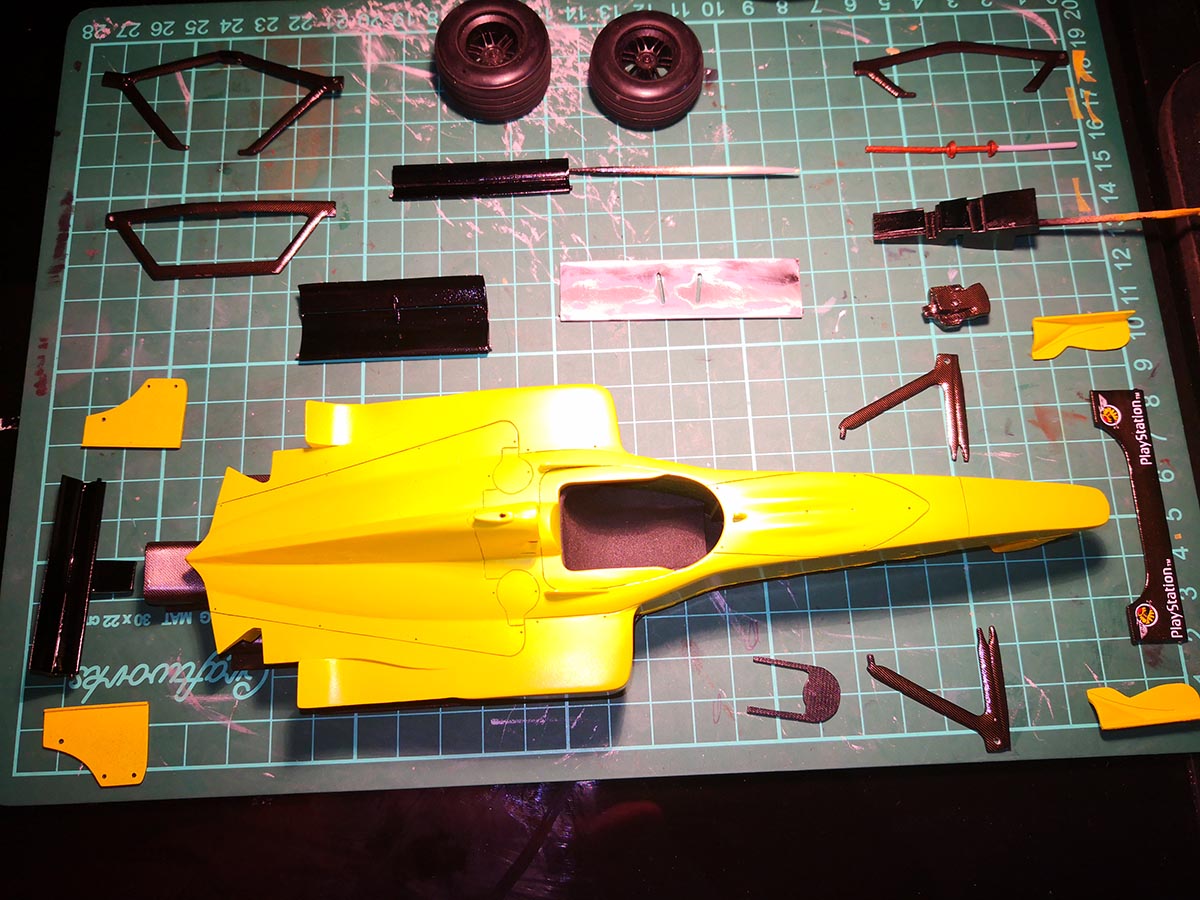 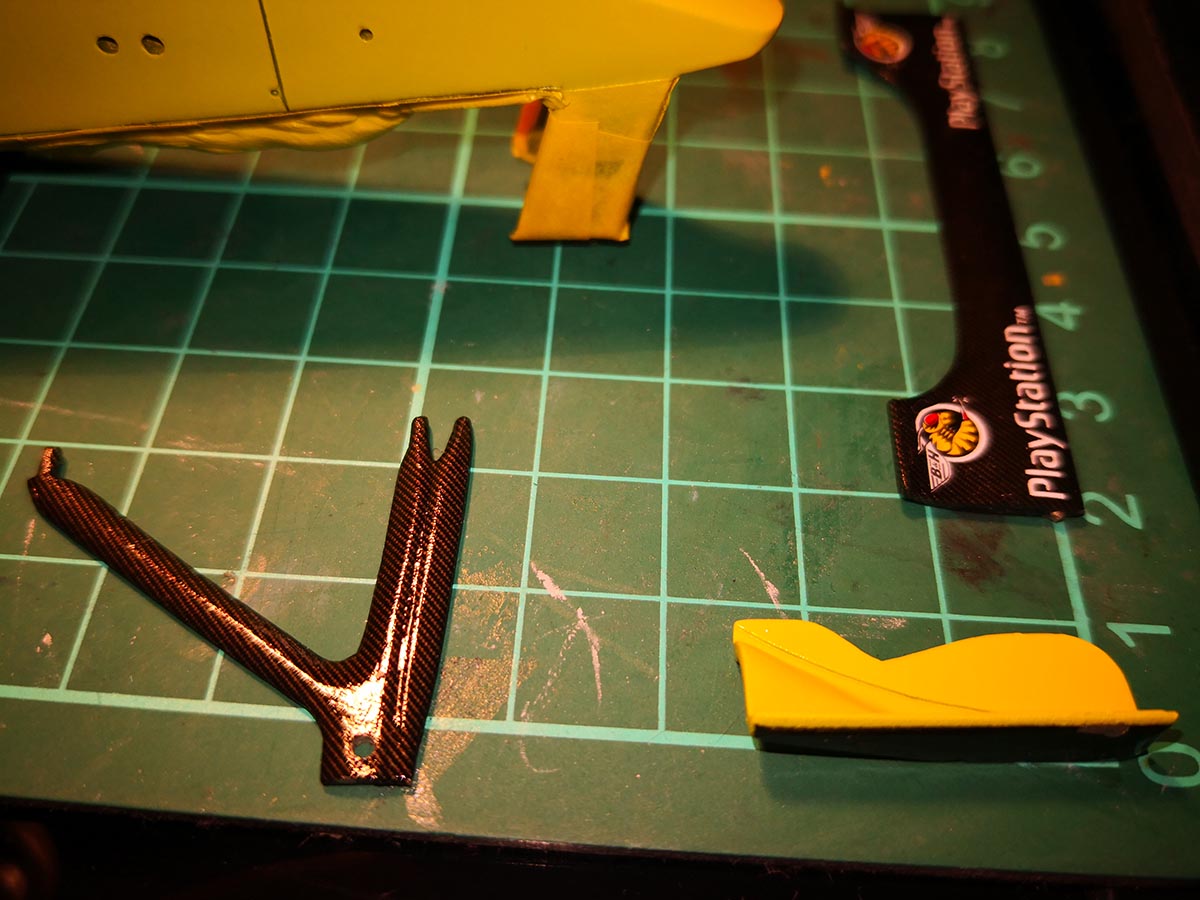 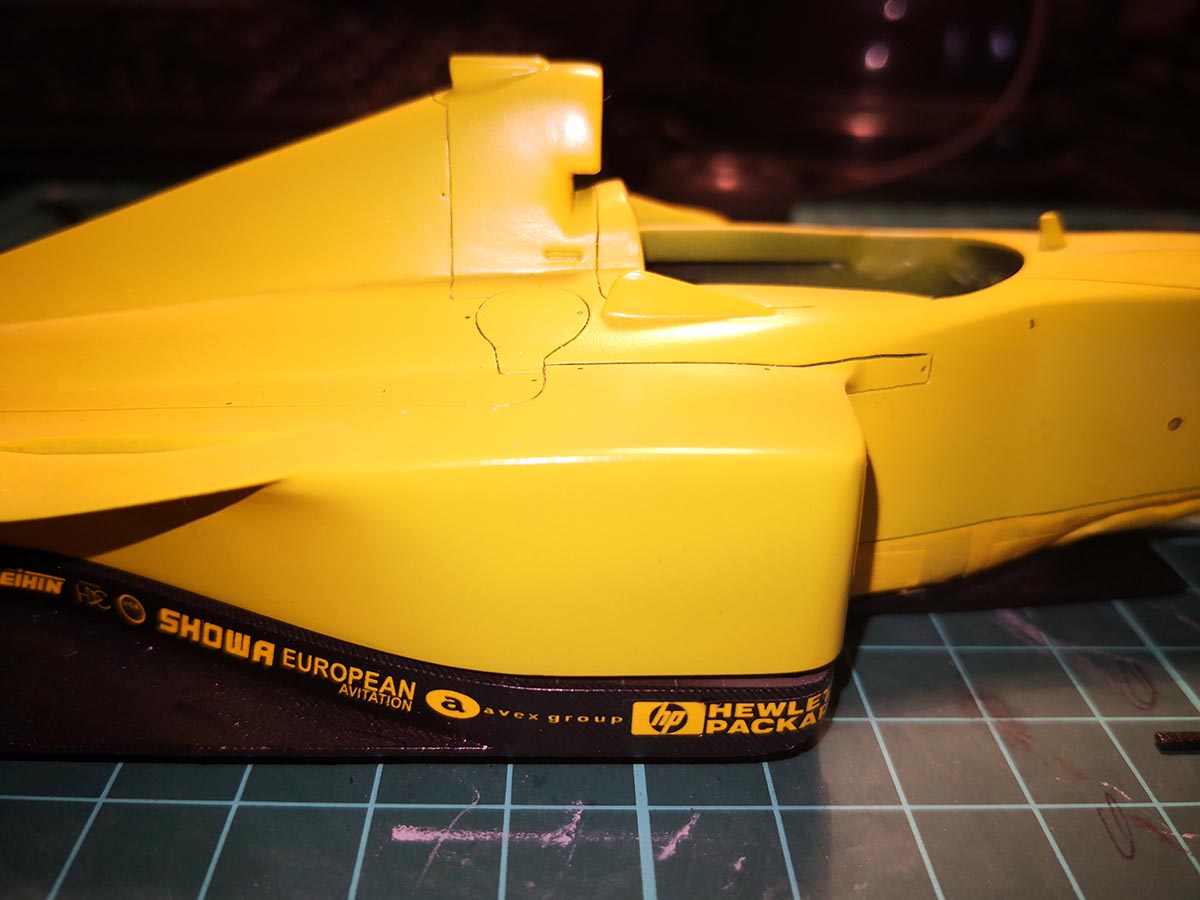 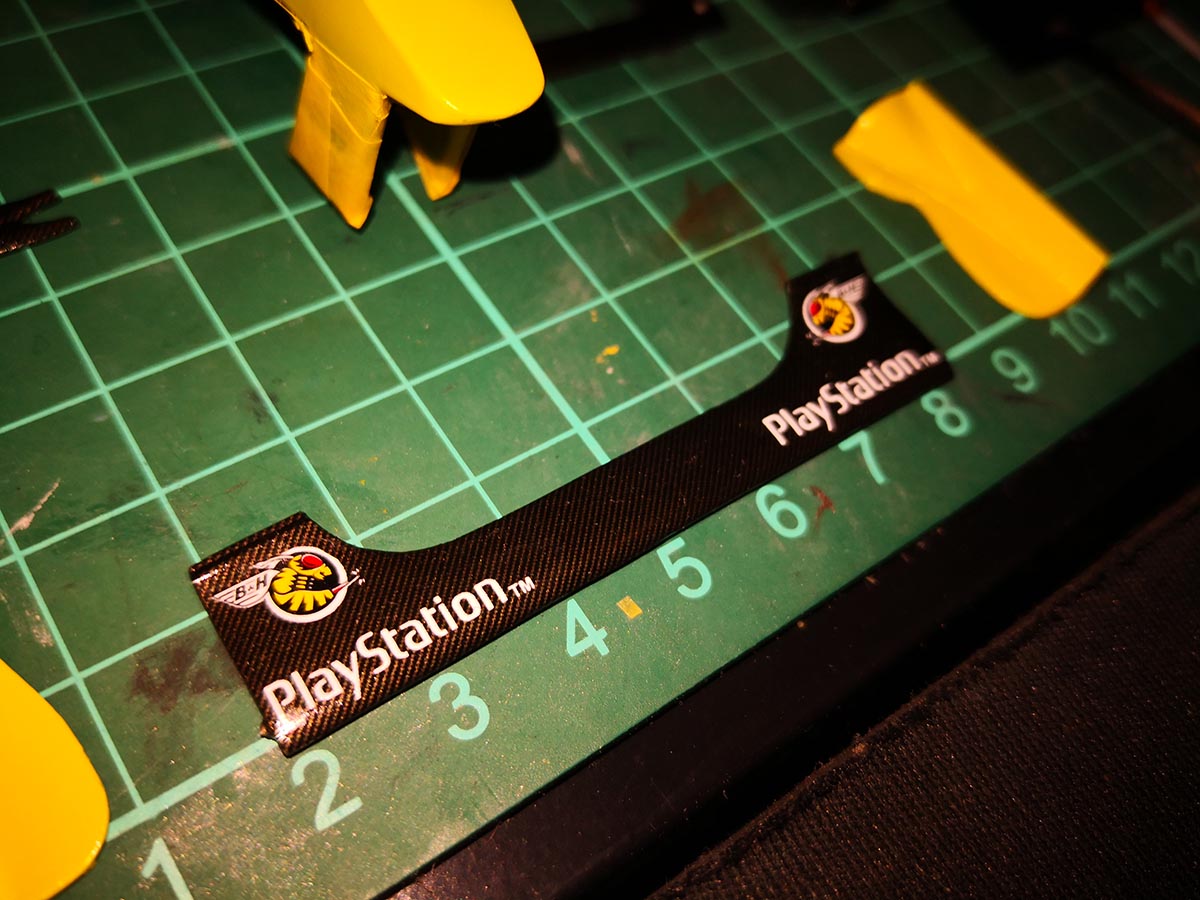 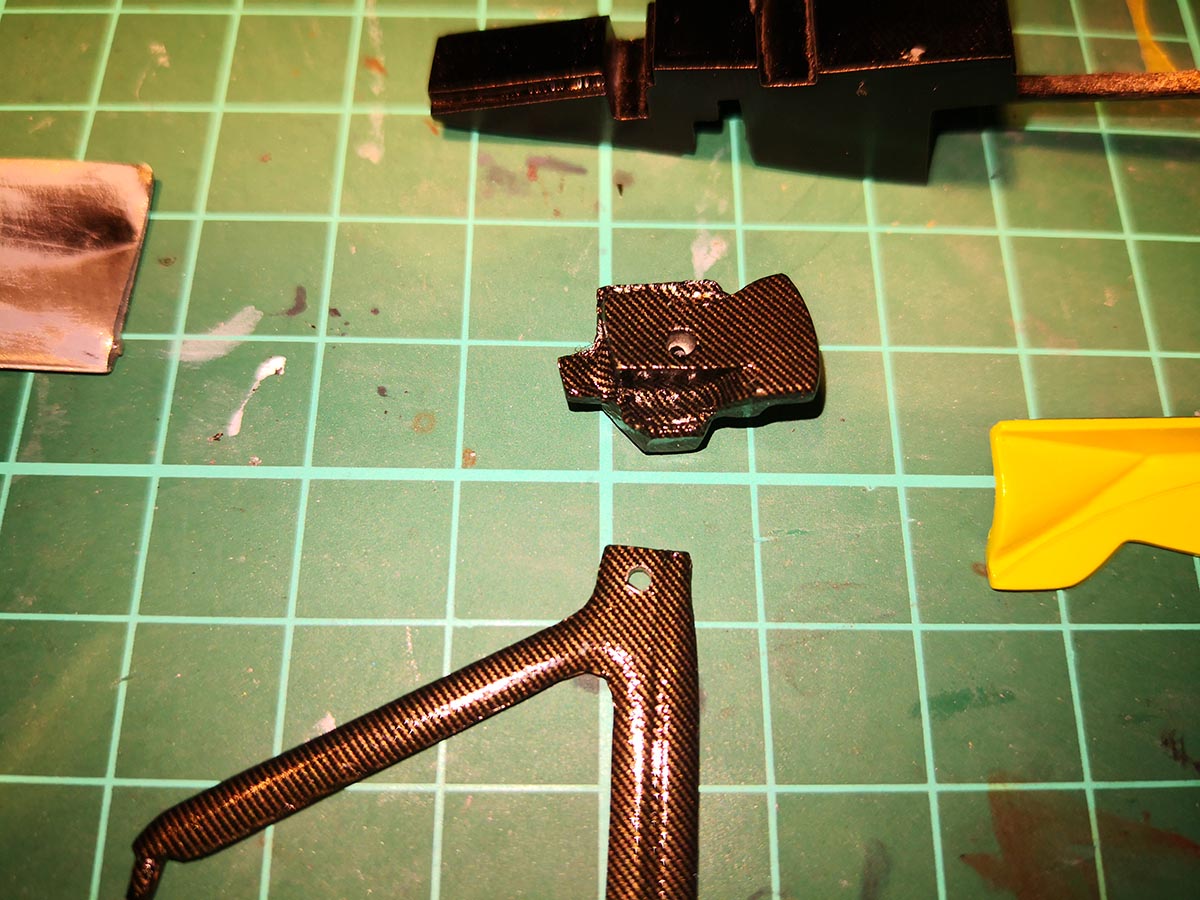 I LOVE how this carbon fiber is coming out. It's Scale MotorSport 1/20 black/pewter twill-weave CF decal, with a top coat of Tamiya Smoke. 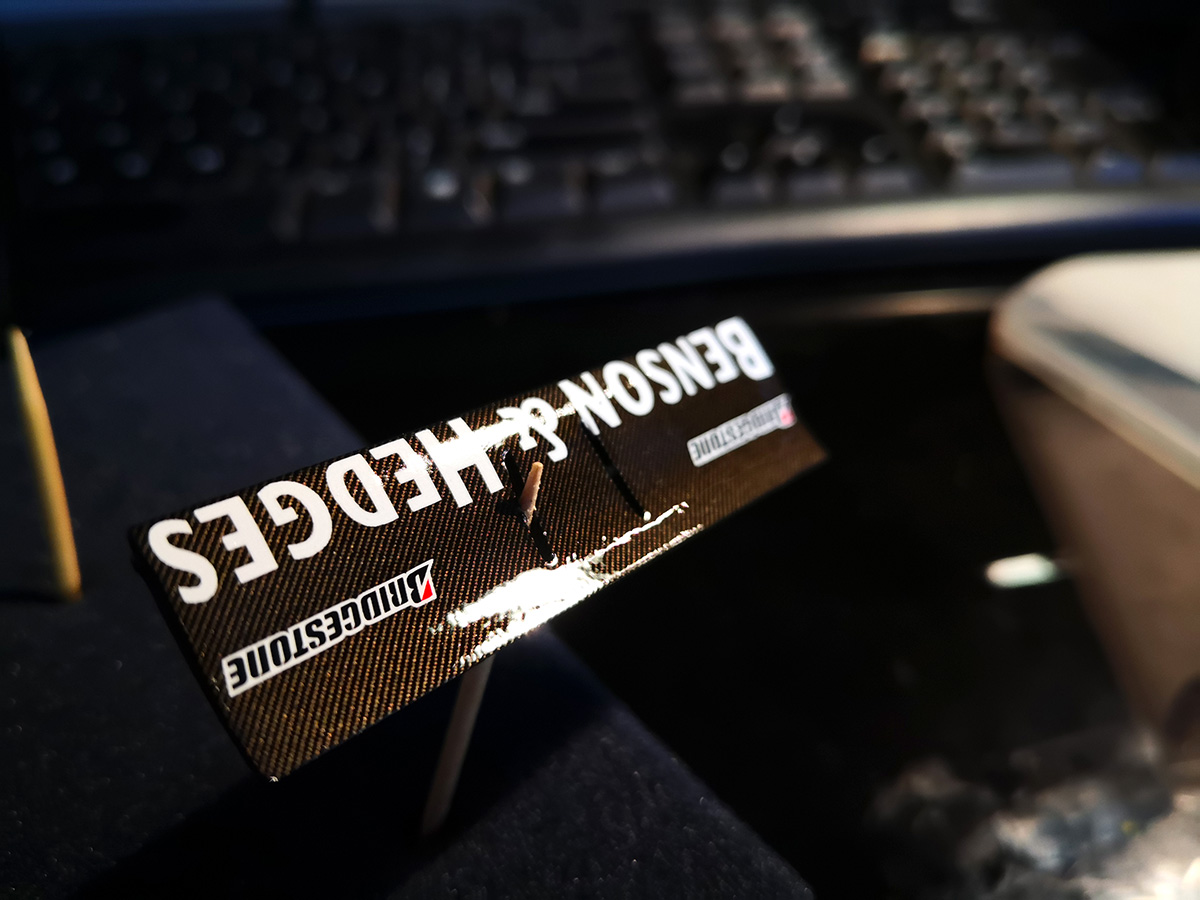 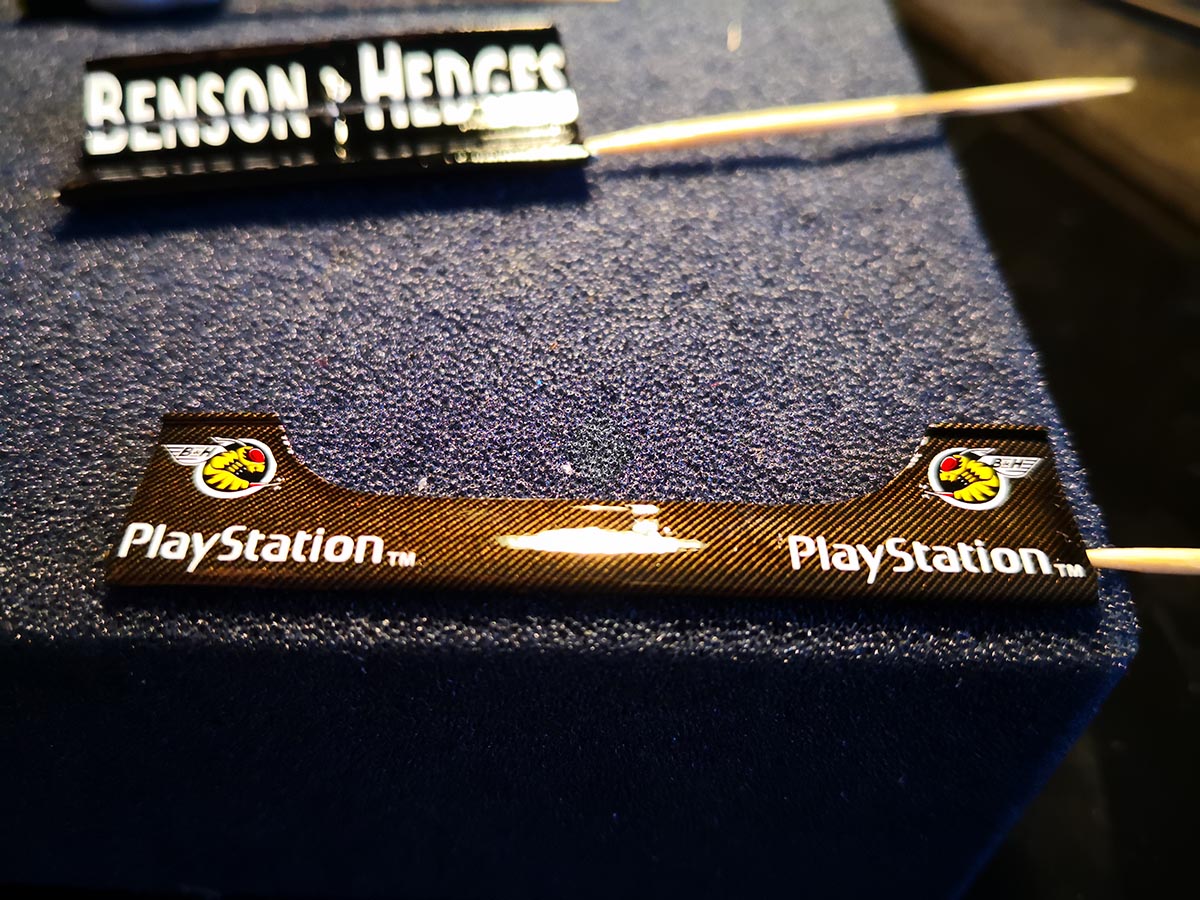 And finally the current state of the body after a few weeks of getting to it whenever possible. The lifted paint is all sanded back and successive layers of primer are going down, being polished in between so that everything comes out as smoothly as possible. Having said that, I'm really taking the approach of 'close enough is good enough', simply so that I don't drive myself crazy. To be honest I know that I've got enough years of doing this under my belt now that the finished product will come out to a high quality even if I don't chase perfection, so I'm just going with the flow and enjoying the process rather than fighting it like I used to... 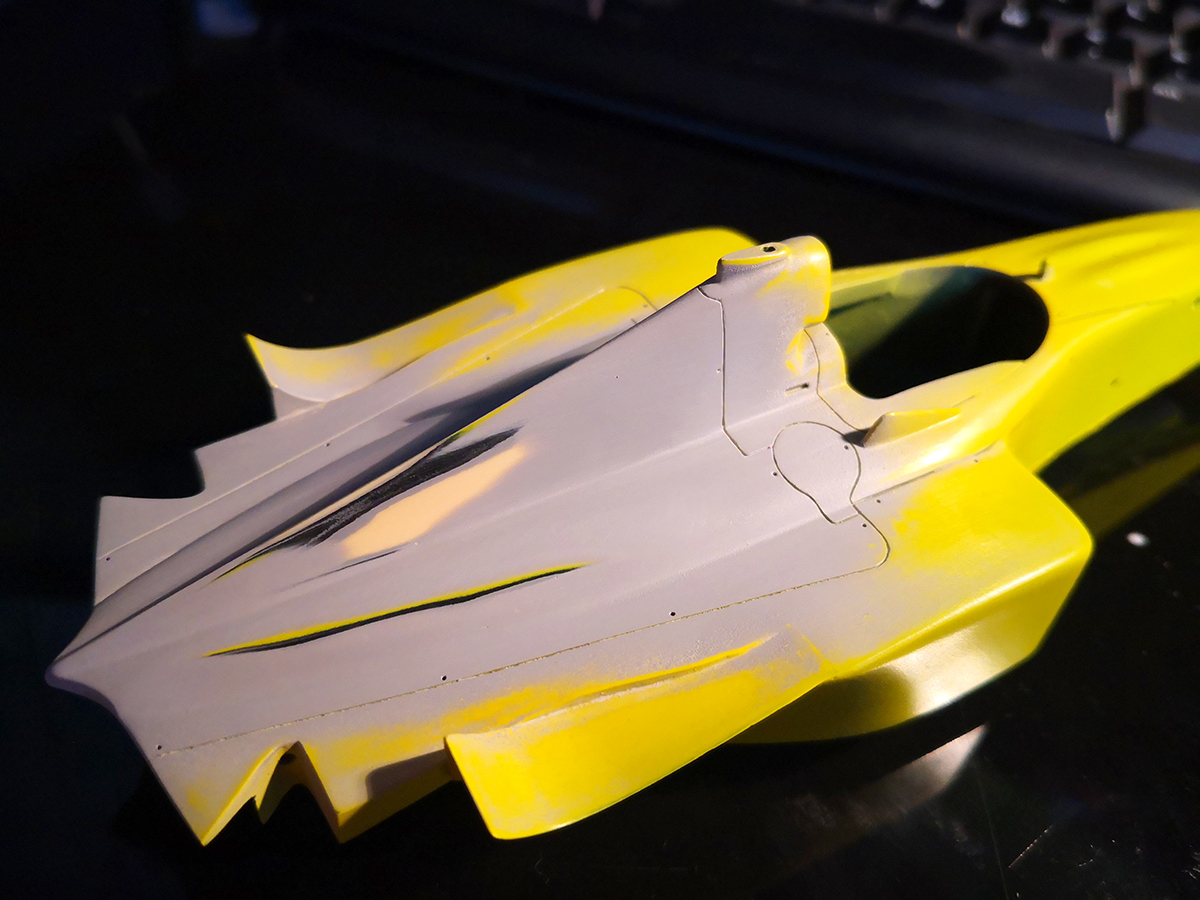 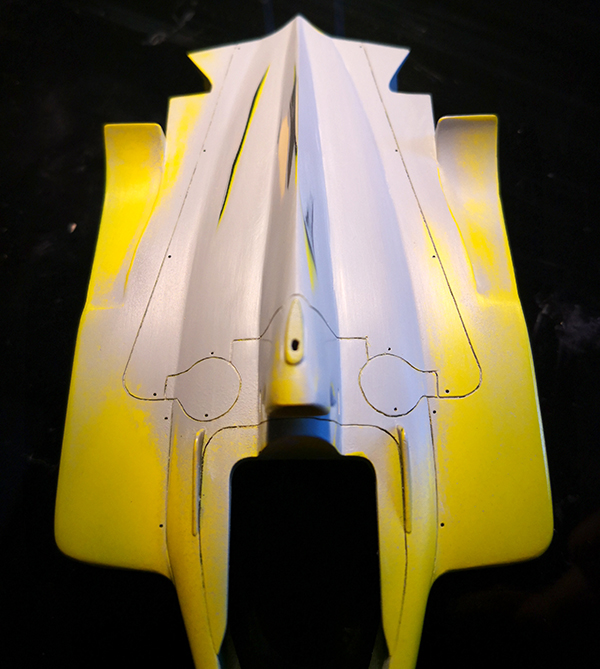 So that's the build as it stands now, ten years in the making so far haha. This build has gone from one of massive frustration to one that I'm thoroughly enjoying. The parts are all well moulded and the cleanup of them isn't overly onerous, and the decals have been a dream to work with even though they're probably not far off two decades old.

If there's interest I'll keep the thread going over the coming weeks (and maybe months) to show you all the good and the bad of this particular kit, and hopefully I do this outstanding livery justice!

All the best everyone!
Mark Excellent work and that Scale Motorsport carbon fiber decal is the business, clever to add the Tamiya smoke over it.

Hi Captain Mark!
forgive my ignorance on this subject, but it escapes me what is with the chrome finish on these photos?
Is it the yellow paint that requires a layer of chrome underneath? I have never seen anything like that, so just curious to know what is it for!

Other than that good that you are working on this beautiful Jordan again, better 10 years than never.

CaptainMark wrote:... ten years ago I was way too serious about my builds and trying to perfect EVERYTHING. These days I'm just happy to be building, don't care about perfection as long as the finished model looks good, and it's a much more enjoyable experience all round. In fact I haven't felt the need to frisbee a model for quite a while!
Mark

100% agree on this one, I have found out that looking for perfection (besides, it could be perfect for me but not for another fellow modeler!) doesn't make this hobby enjoyable, infact it can stress the hell out of me, something that I want to avoid after 8hrs in the office!
"In my days, the drivers used to go out after a race and chase girls. These days, they thank Vodafone" - Sir Stirling Moss

Thanks for the positive words guys, always appreciated.

forgive my ignorance on this subject, but it escapes me what is with the chrome finish on these photos?
Is it the yellow paint that requires a layer of chrome underneath? I have never seen anything like that, so just curious to know what is it for!

Corpsegrinder, I can't recall if it's straight black from a Tamiya lacquer spray can or the Zero Paints black I bought (I think it's probably Tamiya tbh), but it's just straight black sprayed on damn near perfectly with an almost mirror finish, and the light gives it an outstanding reflective quality. The underside of the nose section needs to be plain black apparently, so no yellow going over the top.

Having said that though, it's been masked up for ten full years while I was getting the yellow topcoat on the rest of the body sorted out, and I'm not relishing pulling the tape off to see how the paint work has fared haha... ah well, sand-spray-sand-spray-sand-spray until "close enough is good enough" is achieved, and I'll be happy with it.

Wow, so that on the photo is glossy black!!! My eyes are really tricking me, unbelievable finish, hard to believe that is not a chrome. Yes the reflection of the light makes it look like a mirror. Very nice work!!!!!!
"In my days, the drivers used to go out after a race and chase girls. These days, they thank Vodafone" - Sir Stirling Moss

cant wait to see the results of this

one of my favourite cars

Welcome back. I'm certainly keen to see how this kit turns out. I had to look twice at the black paint finish as I thought it was chrome too. Please keep the updates coming...

Great to J199 back on work table. Looking forward to completion of it.
Sergey's Blog - http://lezdep.blogspot.com/ | Public Gallery - http://picasaweb.google.com/lezdep

Welcome back Captain Mark, great to see you back here !!

I must admit I am also puzzled about why you used chrome as an undercoat. Black I can understand, but chrome?

Given the headaches that the lifting paint has already given you, I would be inclined to bin the existing paintwork and start again. At least stripping it all back to bare resin allows you the chance to get the resin free of any contamination, and also allows you the opportunity to repaint with the correct J199 paint.

Putting aside the question of accuracy, it is quite likely that the bottles of paint you have remaining may have gone beyond their shelf life. Shelf life for bottled paint is a factor worth considering, and for such a terrific looking car I would consider fresh paint instead.

Looking forward to your next update, but please don't leave it for another ten years !!

Paul_OFarrell wrote:I must admit I am also puzzled about why you used chrome as an undercoat. Black I can understand, but chrome?

Read it again. Not chrome. No chrome was used in the making of this model. LOL.

There are currently 7 users online.