Hi everyone,
It's been a while since I've finished an F1 car because I've been doing a lot of NASCAR modeling lately. Both in building kits and modifying and weathering diecasts. I figured I'd make a single thread of my finished and ongoing NASCAR projects for ease of use and controlling post clutter.

Hi everyone, it's been several months since I've been here. I will try to stay more active, I love this community. A recent finish is the dreadful Polar Lights Mercury Cyclone II in 1/25. This is finished in the classic Coke colors of Bobby Allison, which he ran off and on from 1969 until 1972. I used Tamiya LP lacquer for the red and Mr. Color lacquer for the gold. All in all I'm pleased with the finished result. 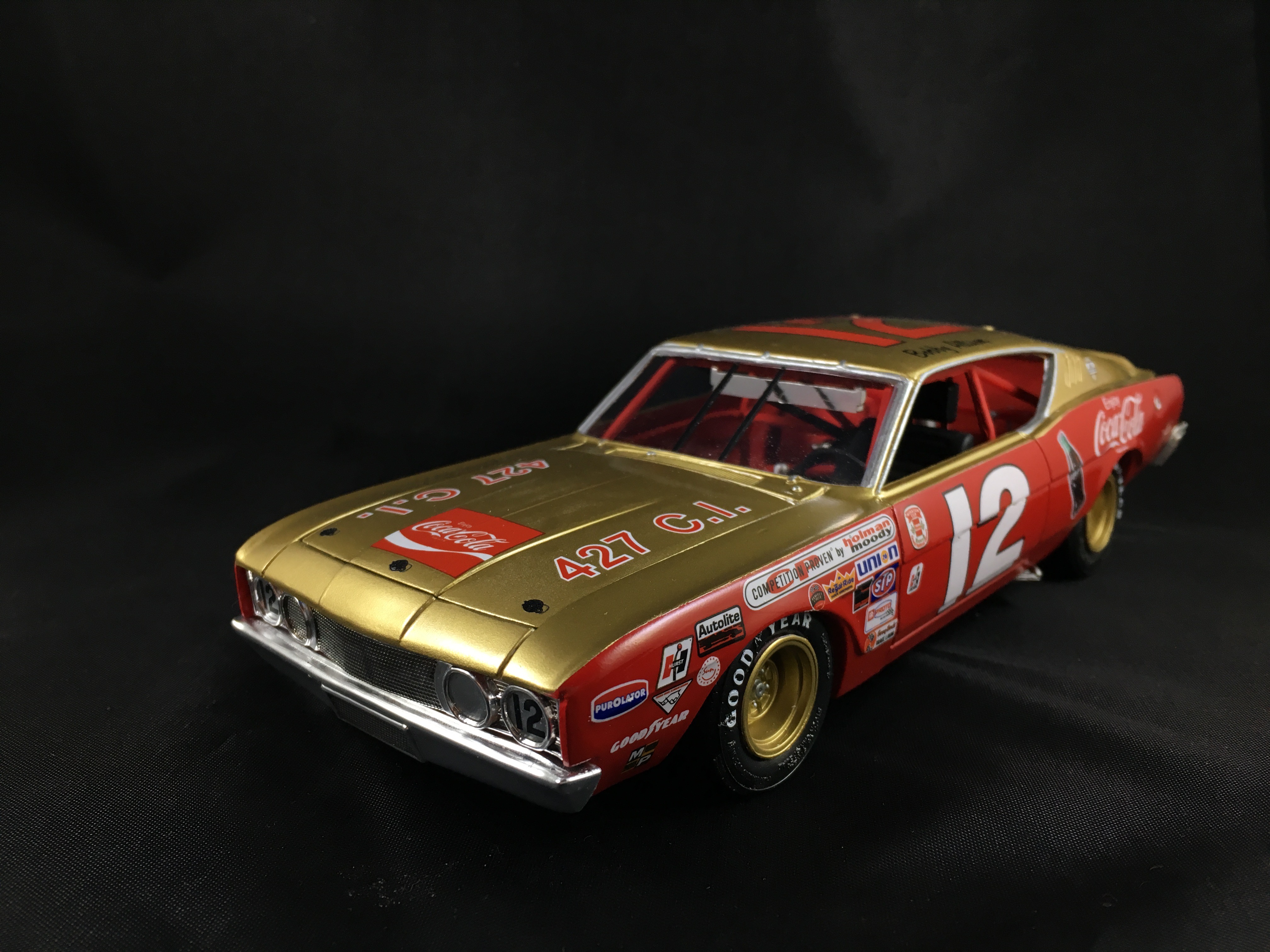 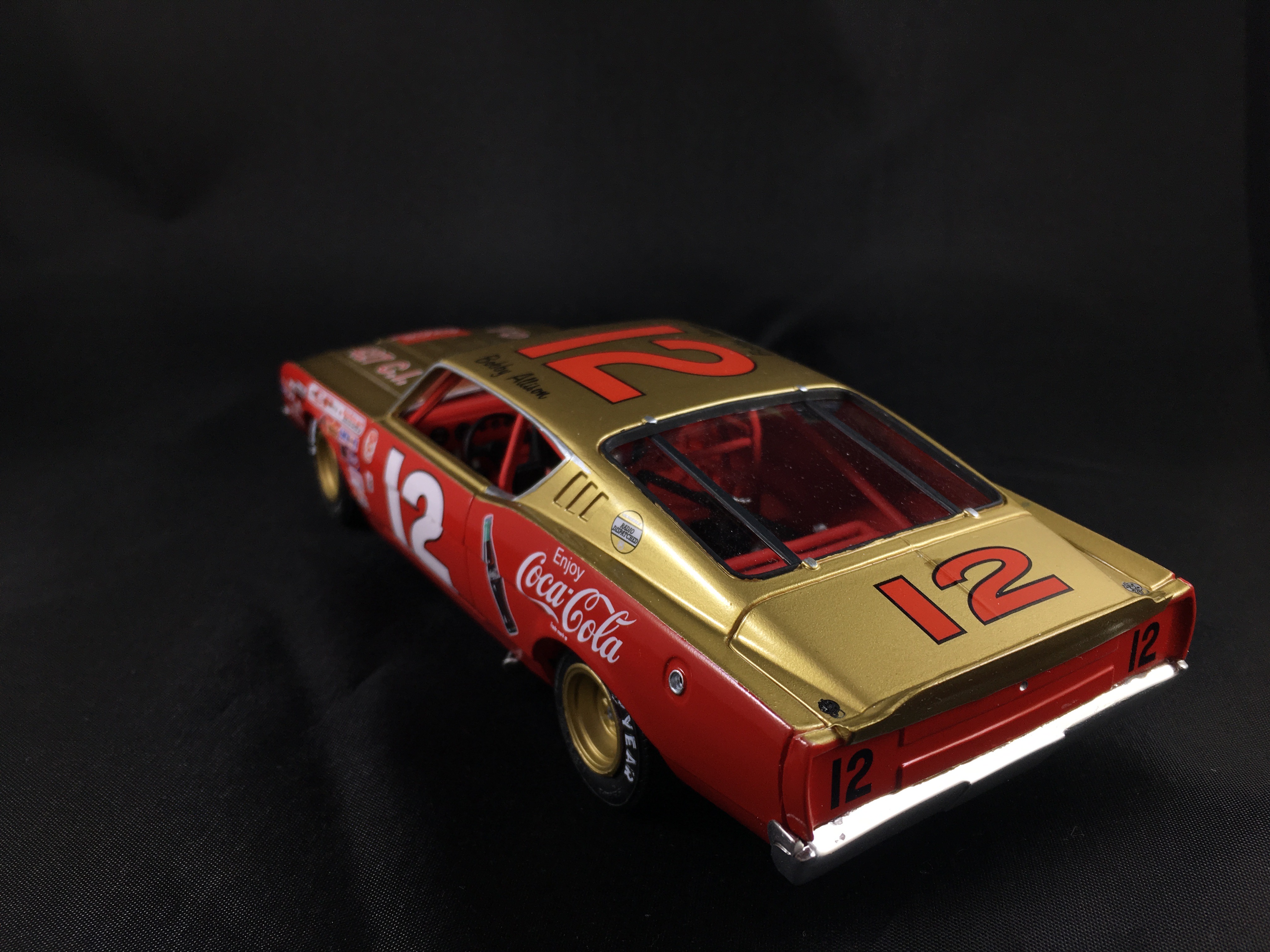 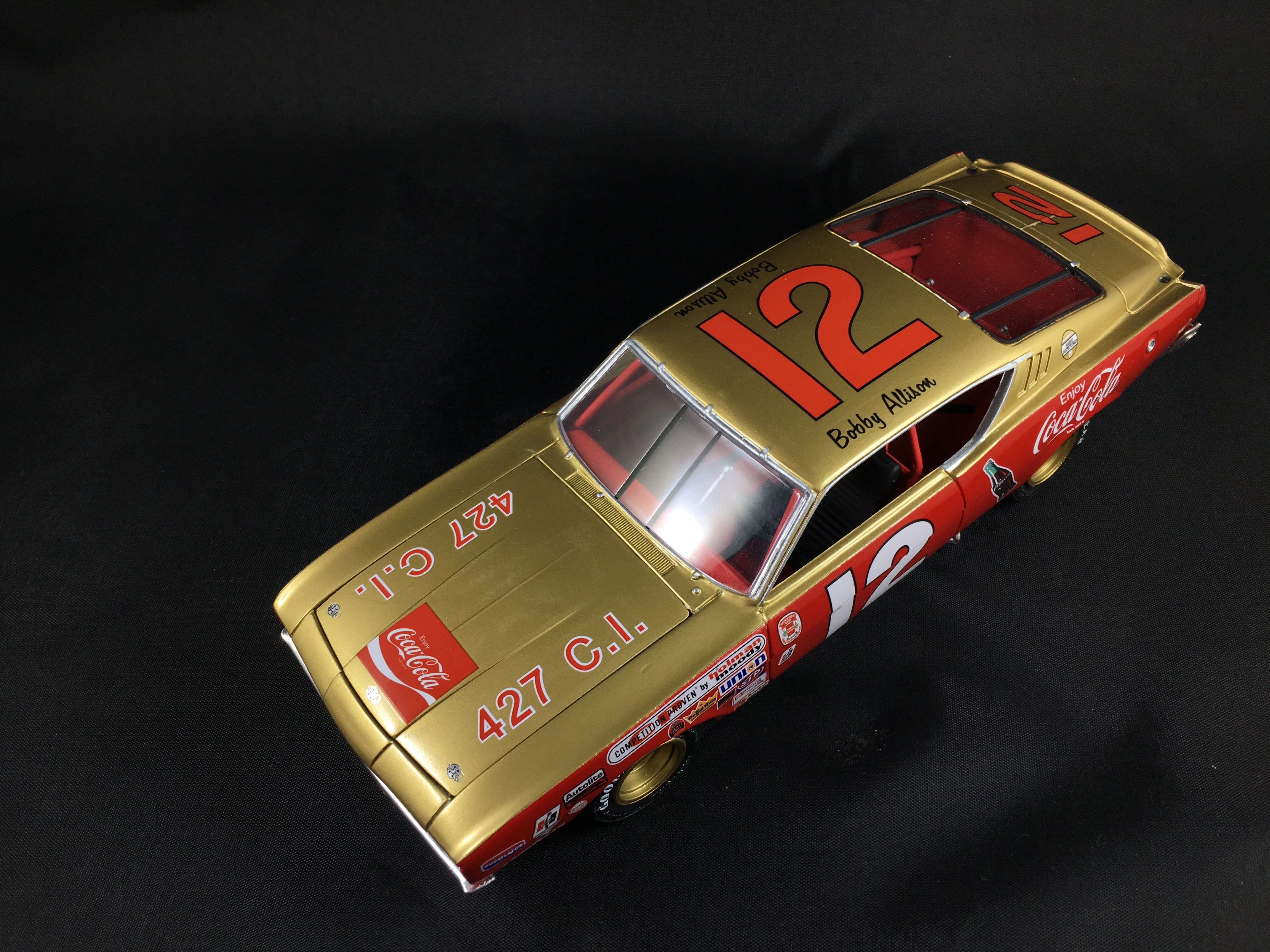 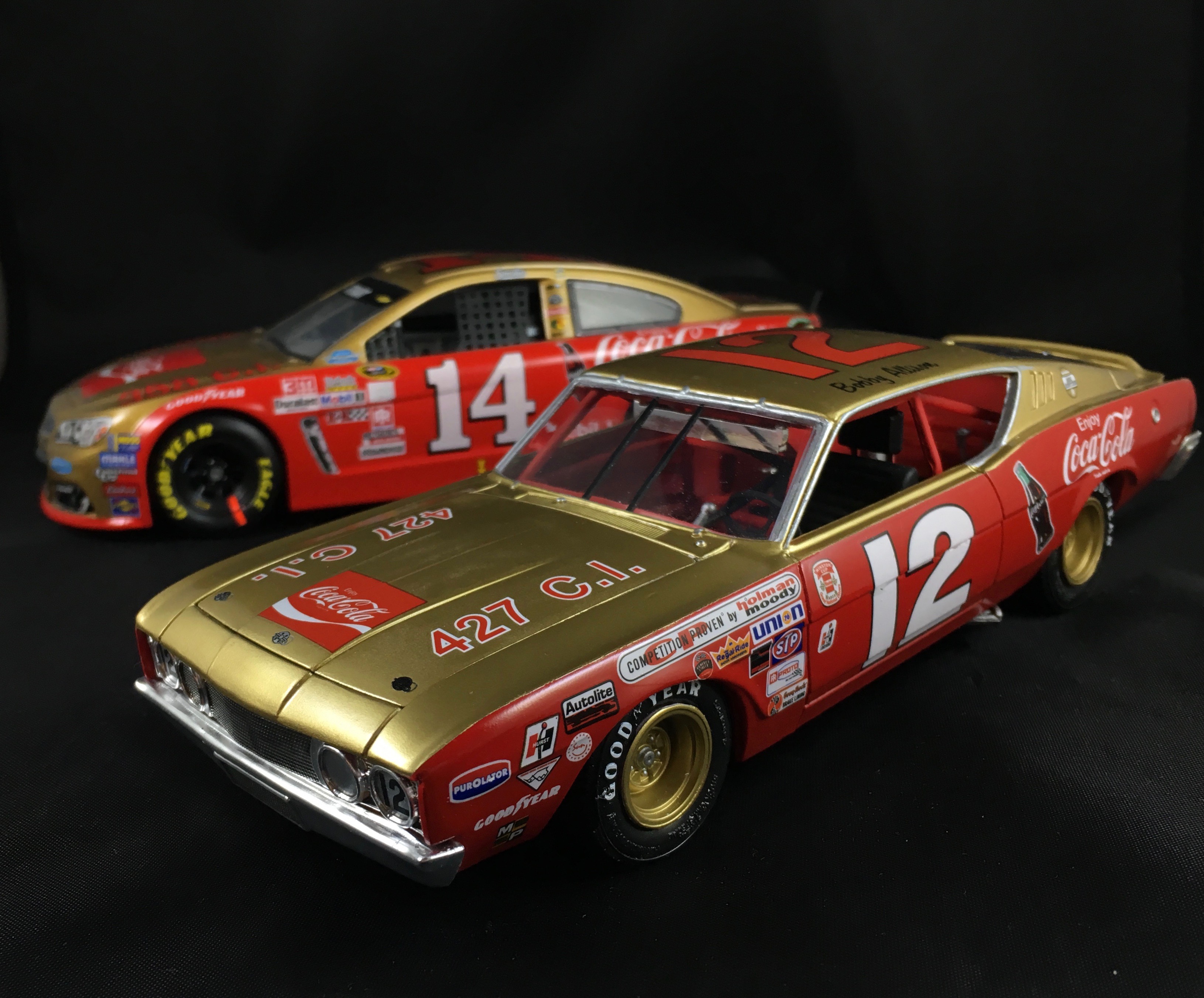 Terry Labonte was my absolute favorite driver growing up and there's something about this Monte Carlo body I just love. I used Tamiya rattlecan for the body. I used some aftermarket decals that were super fragile, so I laid down a heavy coat of Testors Ultra Gloss, then put the decals on, then put a thin coat of Future over them, letting the Ultra Gloss serve as the "shiny" clear. 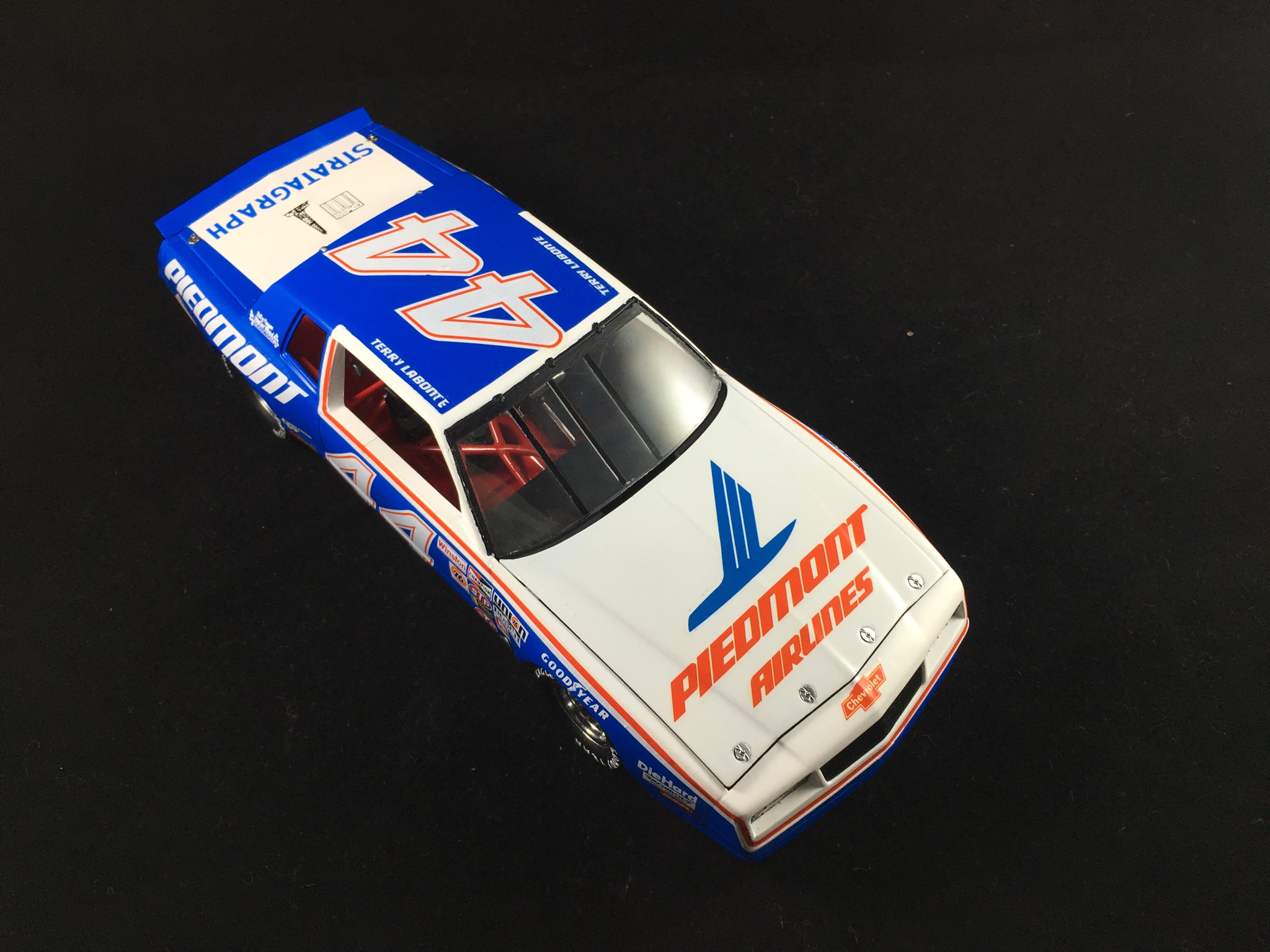 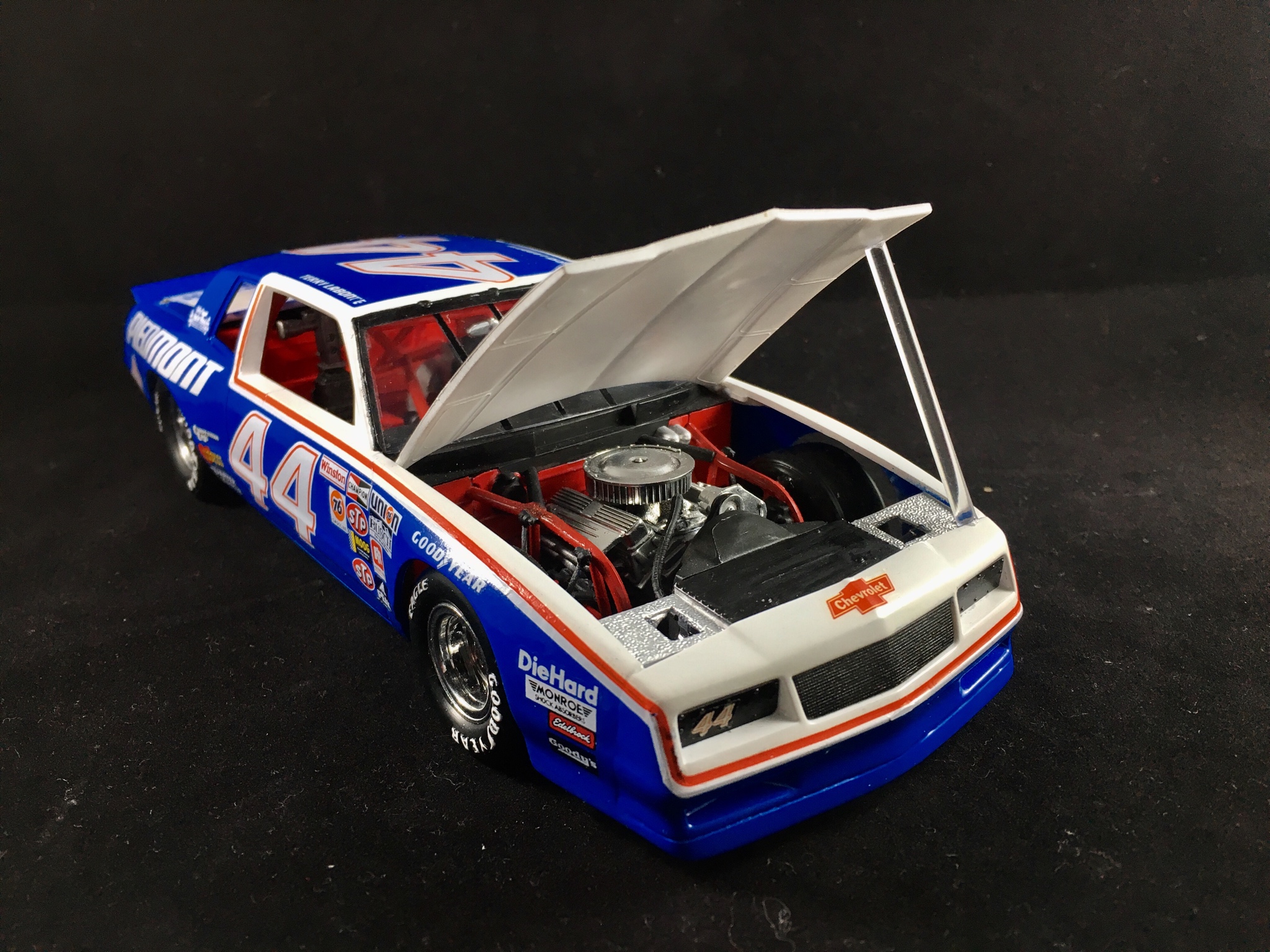 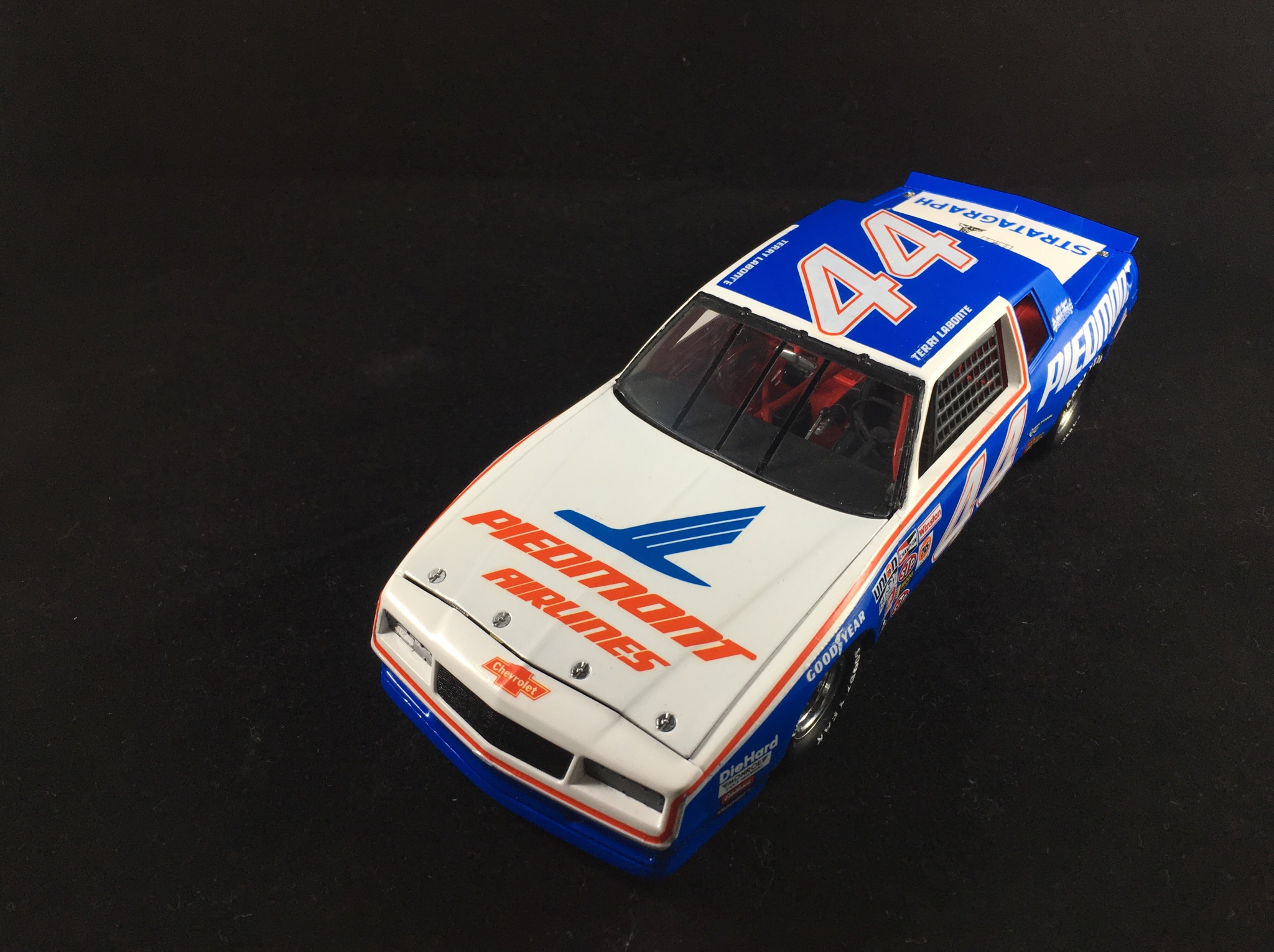 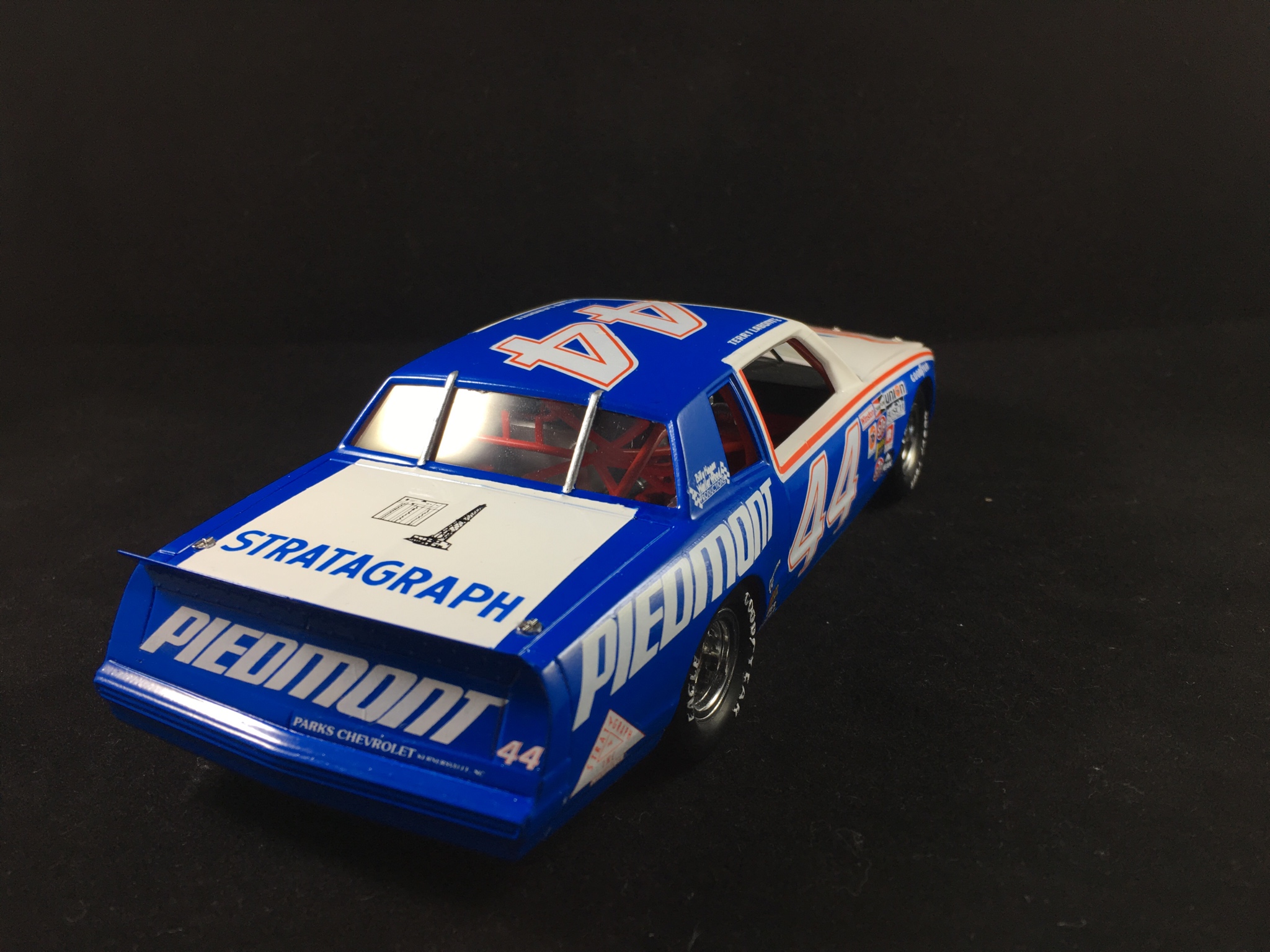 This is a new kit from a new company, JR Salvinos. The car is a 1977 Olds 442 driven by Buddy Baker, known better as the "Grey Ghost." Baker would win the 1980 Daytona 500 in this car. It earned the nickname "Grey Ghost" because it was lightning fast on superspeedways and the muted silver meant other drivers couldn't see it coming up behind them.

Overall this is a nice kit. The decals are outstanding in color and clarity, but fragile. The instructions were very vague and some of the smaller parts could be cleaner cast. But in the end I'm pleased with the level of detail and look forward to their new releases. I experimented with some paint and polish, and ended up screwing up the finish. 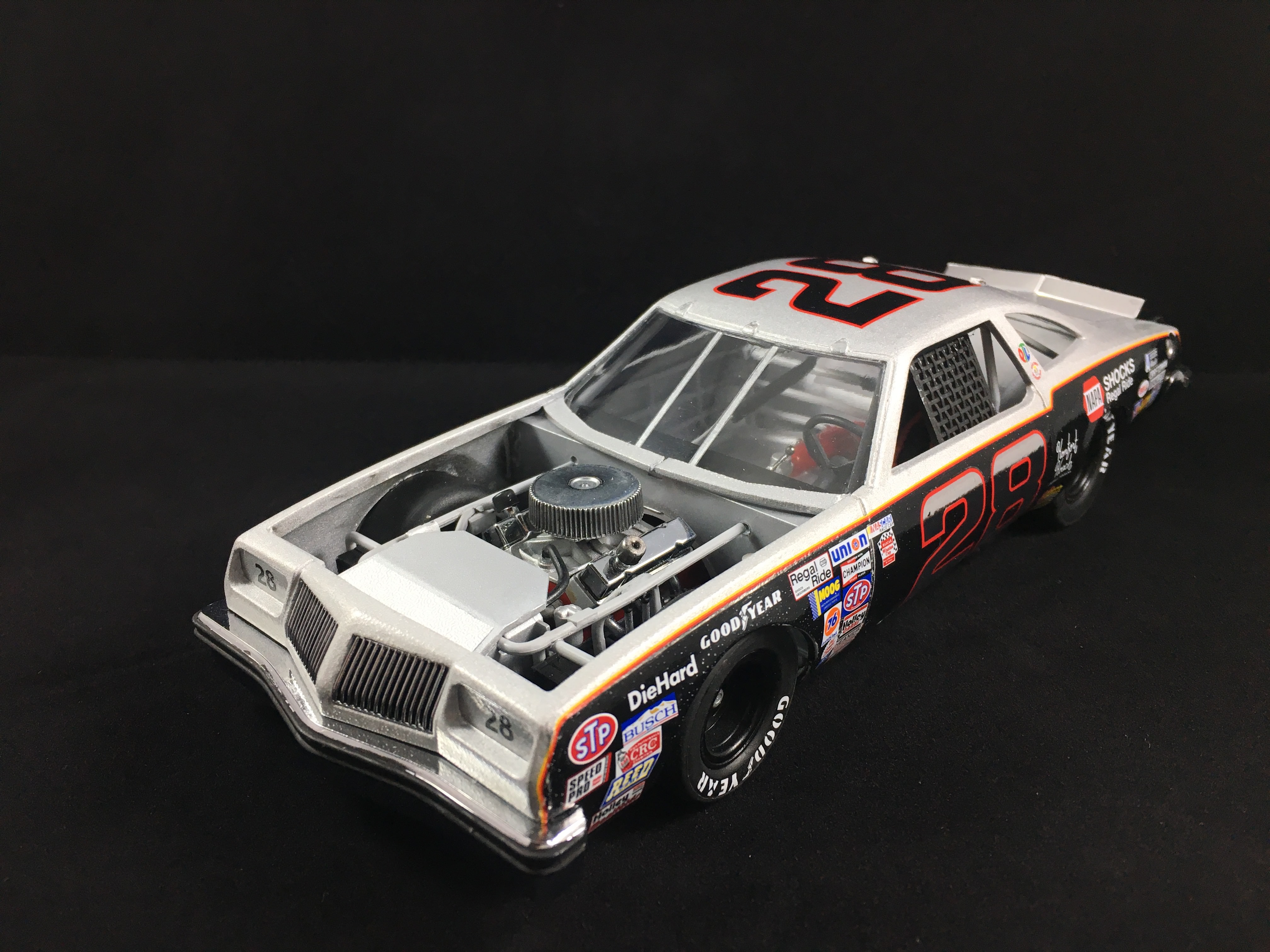 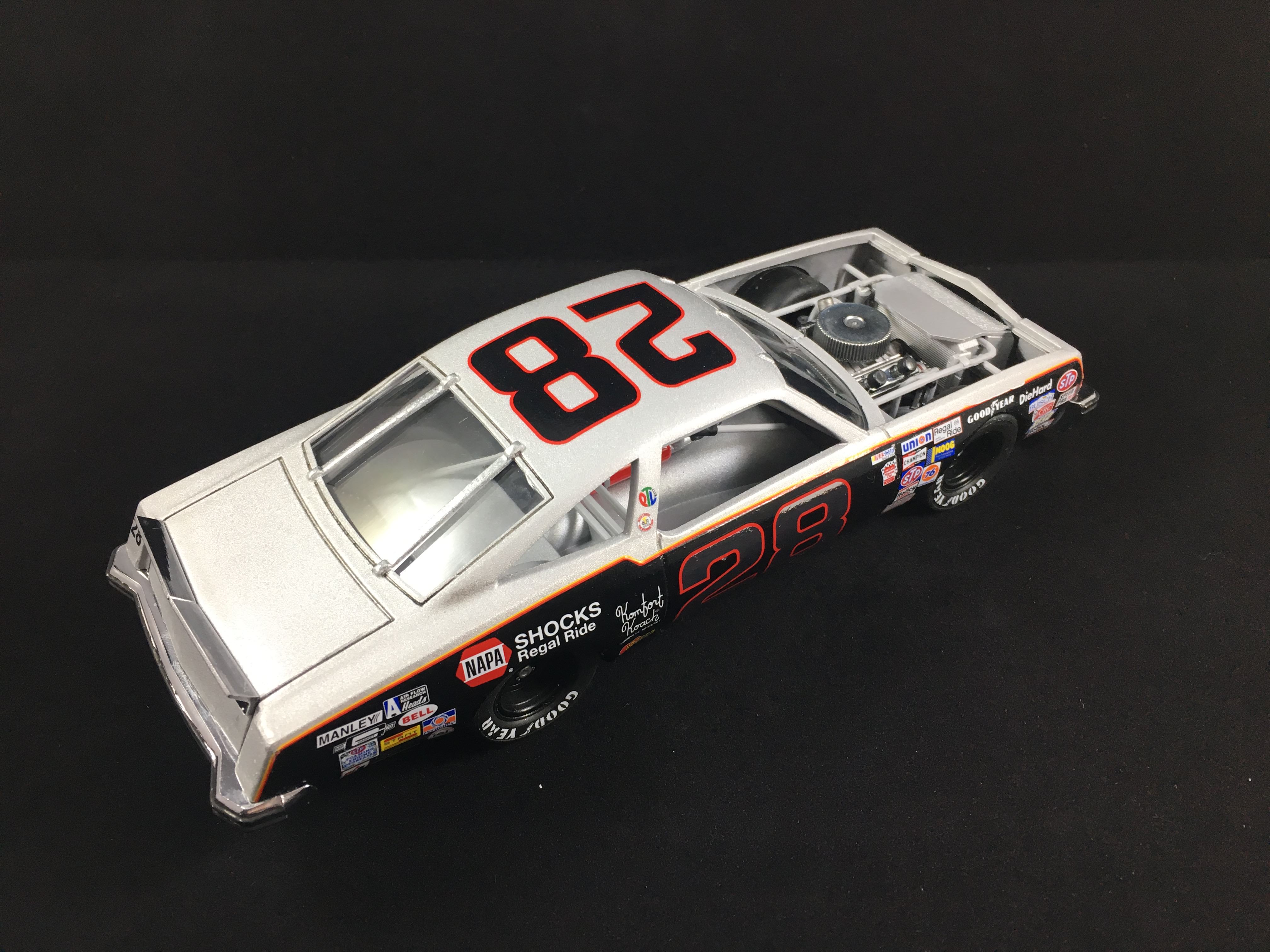 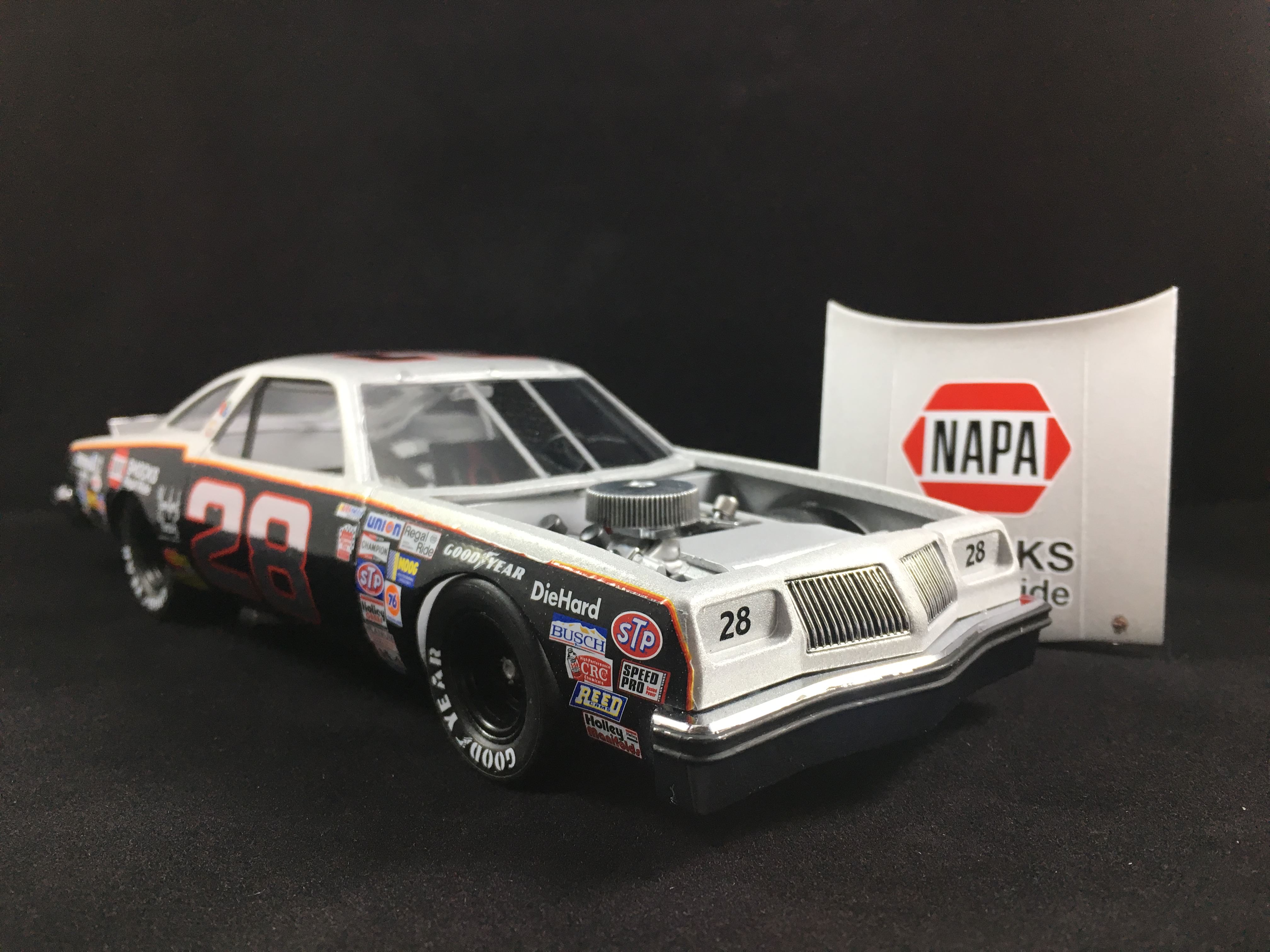 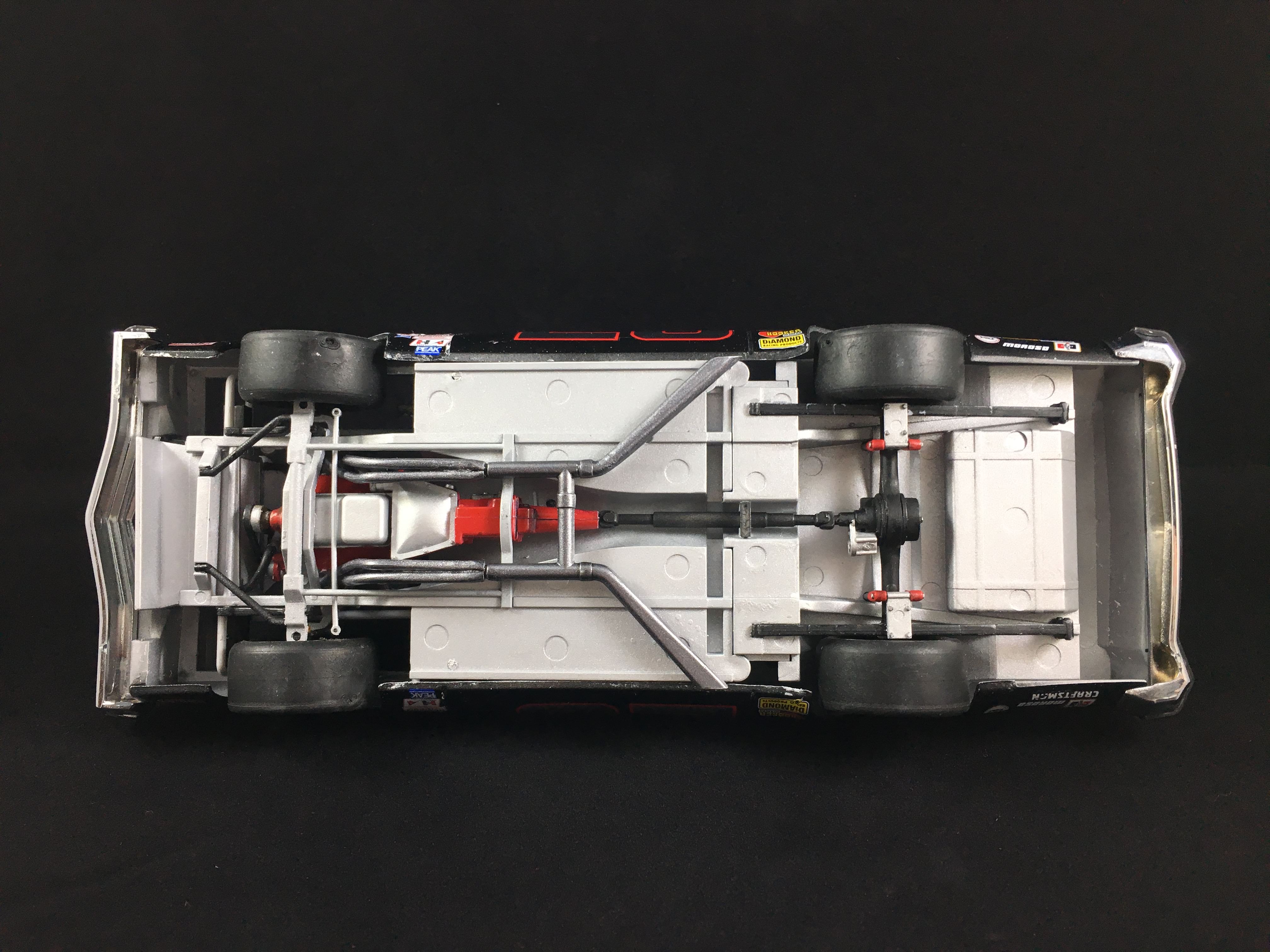 I made from a 1/24 diecast of Gordon's 2011 car. Gordon was a favorite to win the Daytona 500 that year and led much of the first few stints. However he got caught up in a big wreck and finished 28th, 25 laps down in a battered and hastily repaired car.

I updated the car's paint scheme to match the Daytona car and then used electrical tape with CA on the edges to mimic the bear bond tape. I also repainted a fender to replicate the replacement fender installed during repairs. I also added a wash and some streaks for general race wear and tear. 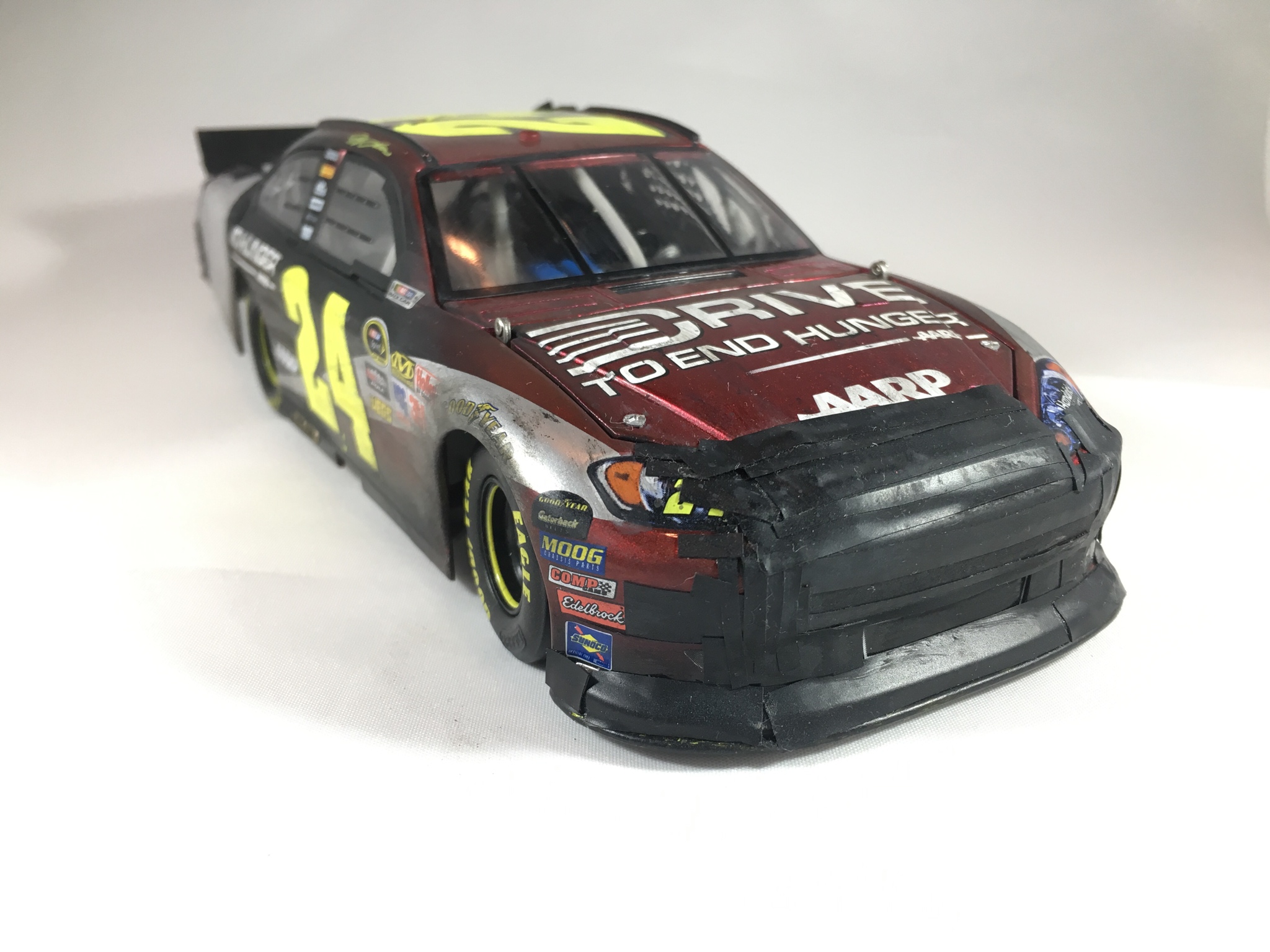 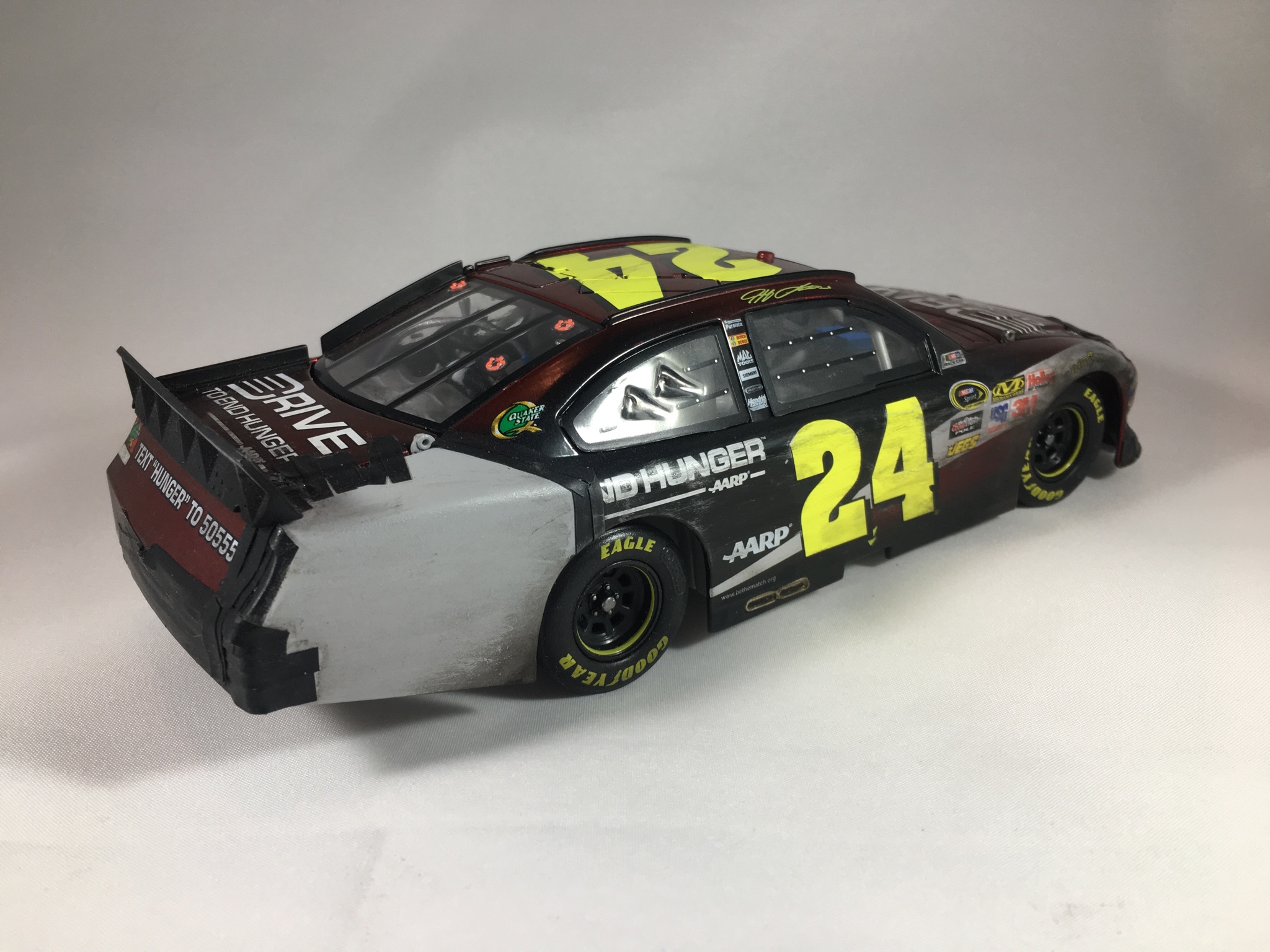 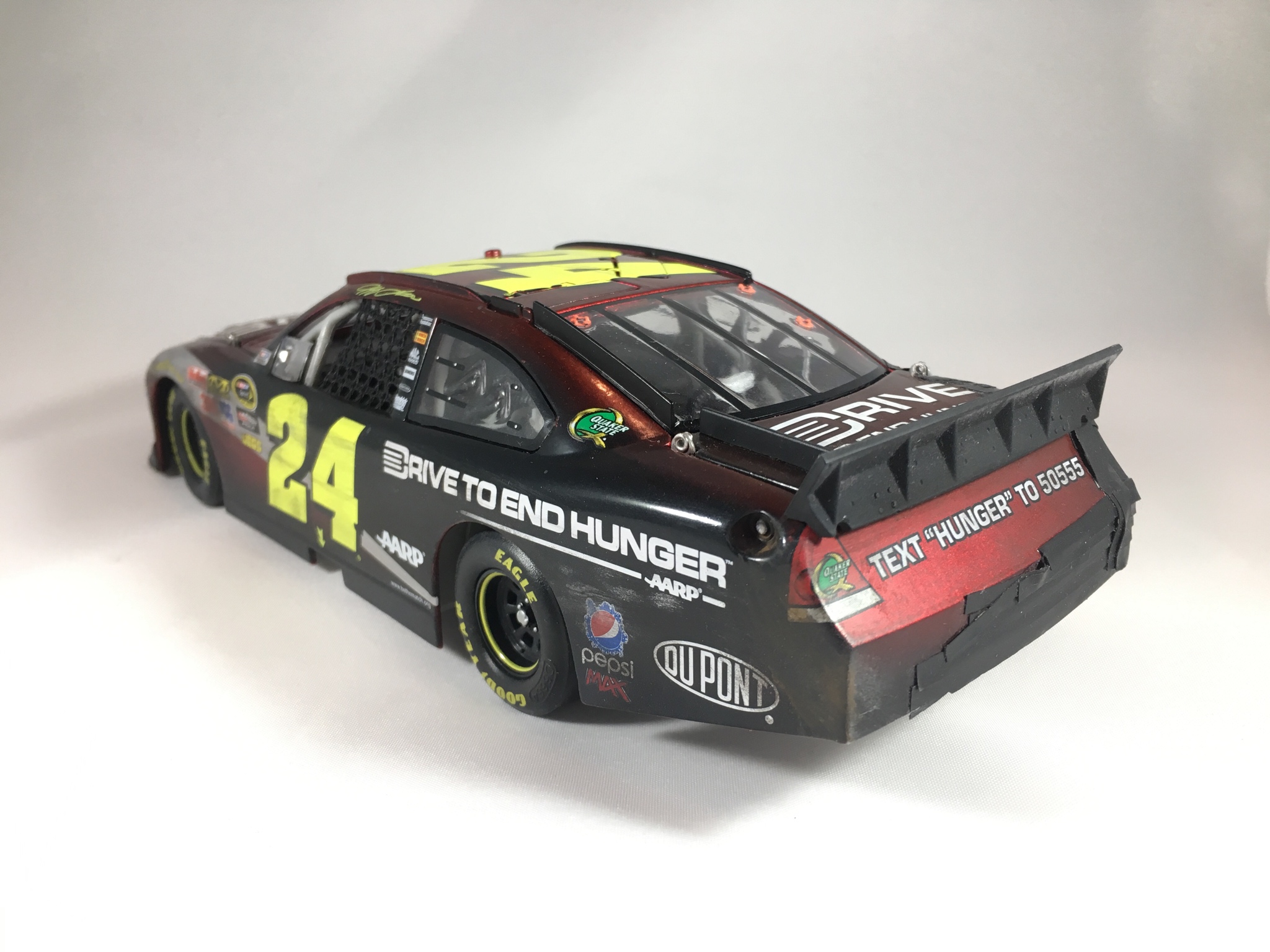 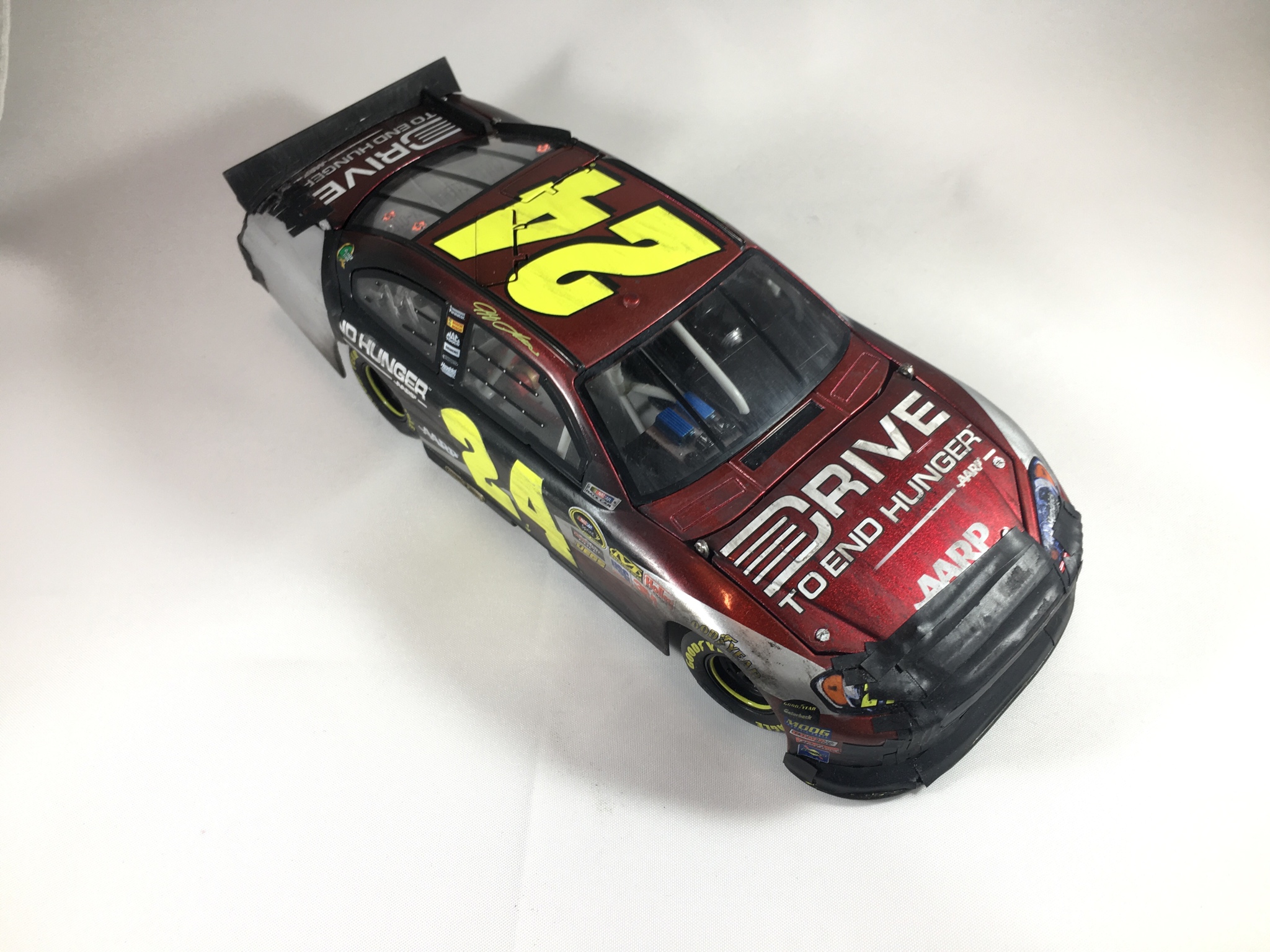 Darlington 2003 was one of the most unforgettable races in NASCAR history. Kurt Busch was leading comfortably when his power steering went out and his car started handling poorly. 2nd placed Ricky Craven chased Busch down and after 2 laps of side-by-side, door-banging racing, Craven beat Busch by inches in a cloud of smoke.

I took a 1/24 diecast of Craven's 'Tide Ride' #32 Pontiac and updated the paint scheme to match that of Darlington 2003. Then I went to town weathering it to bits. It looks heavy, but Craven and Busch's cars were both demolished in that finish. 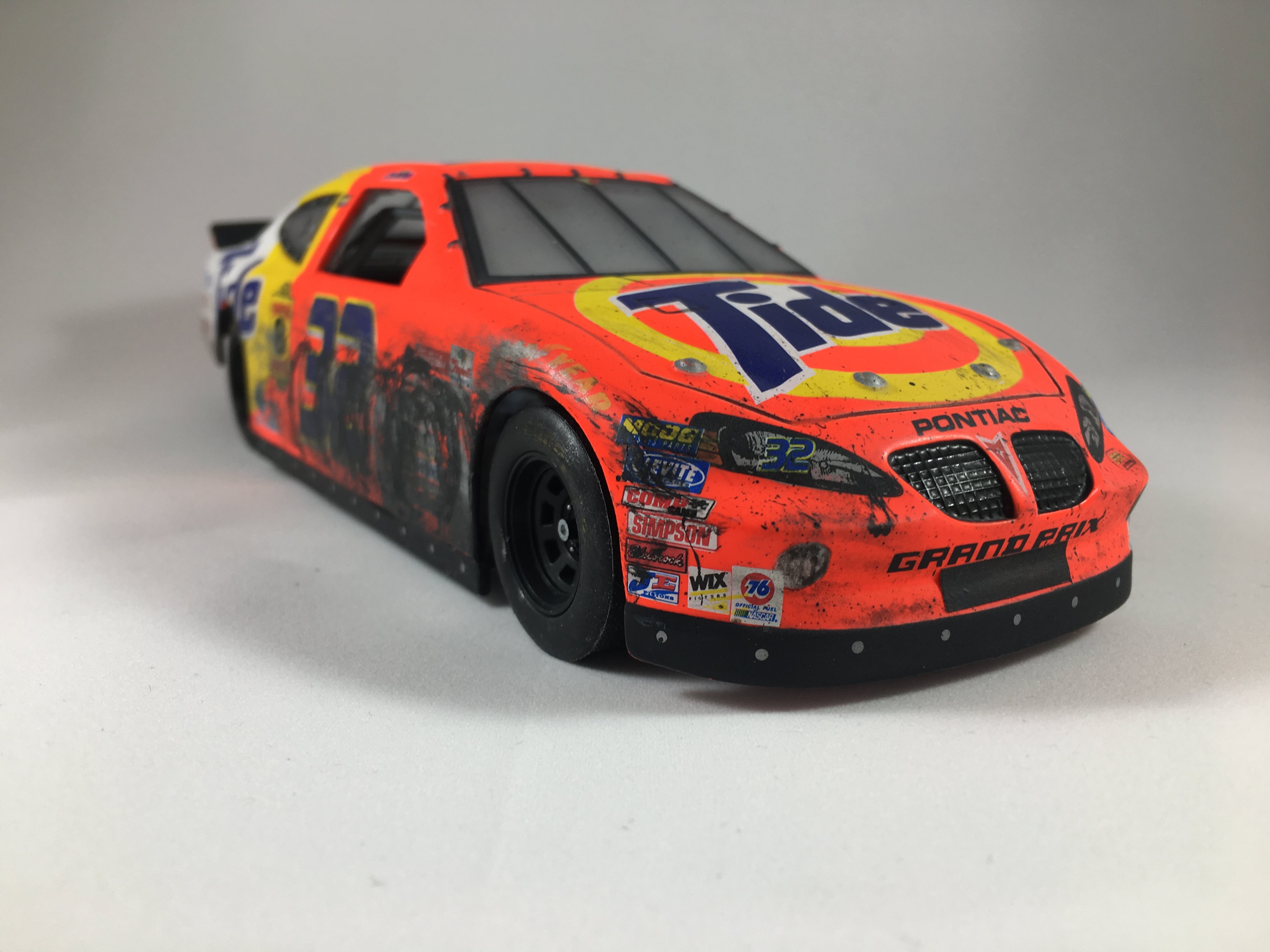 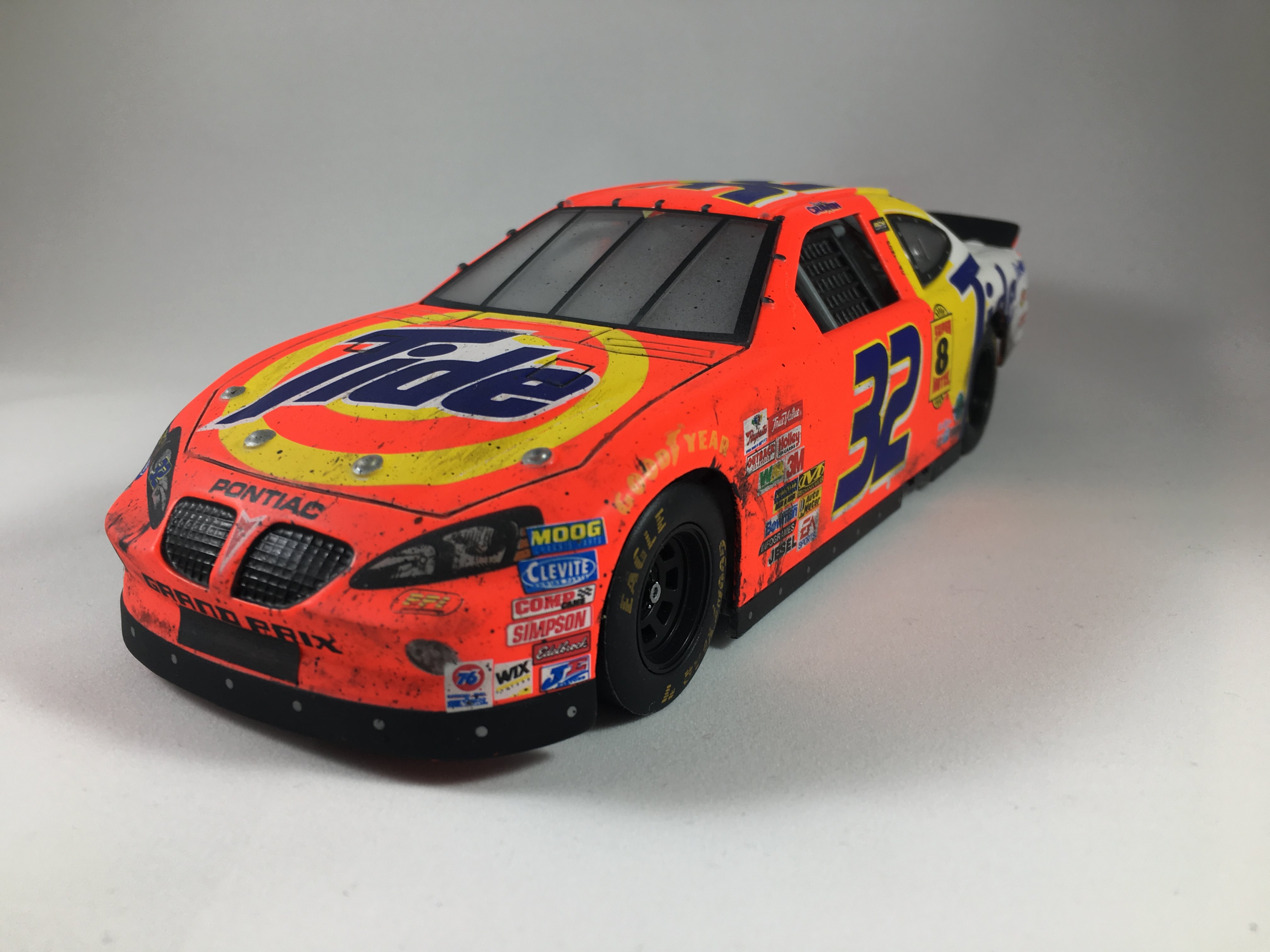 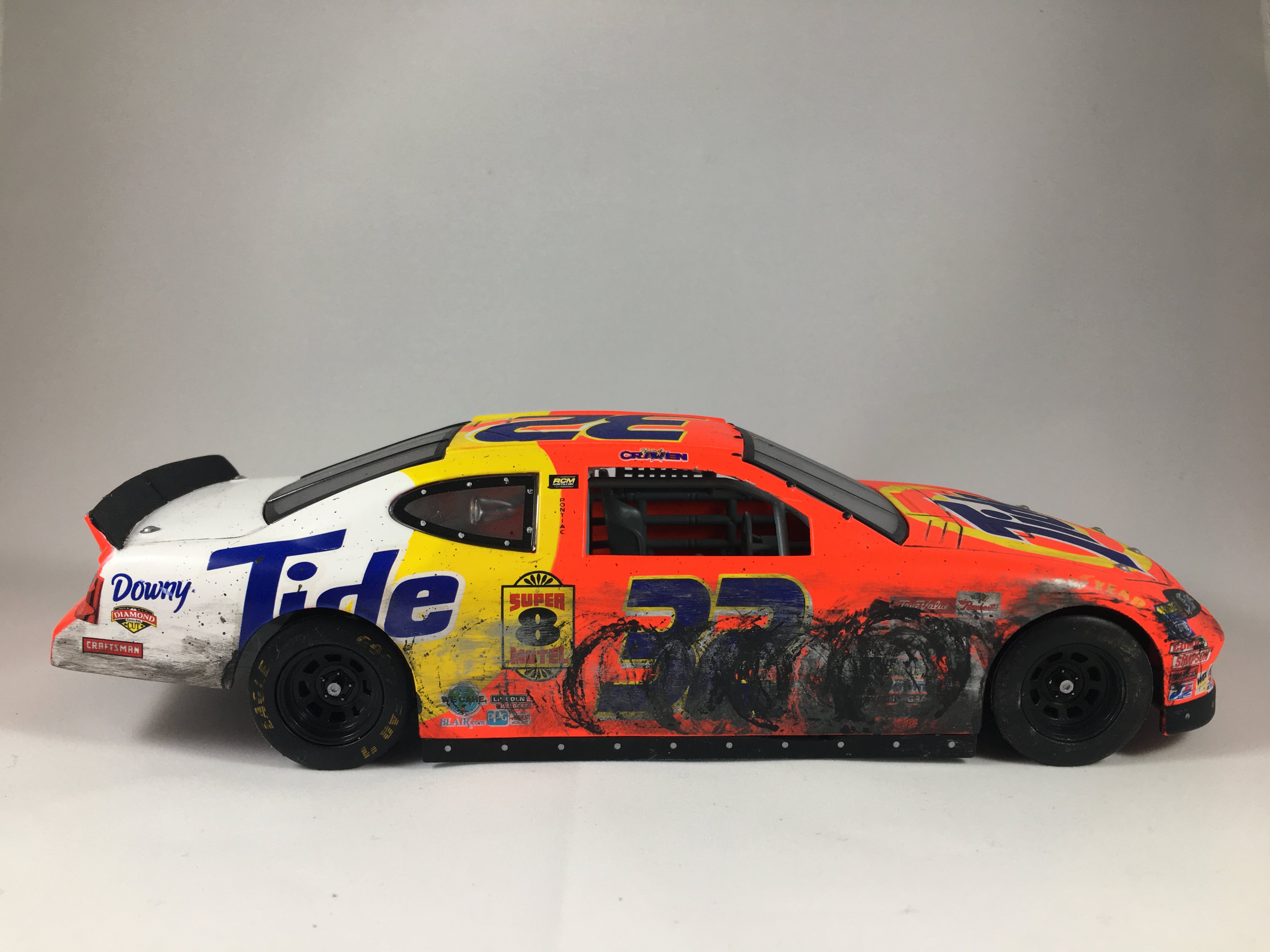 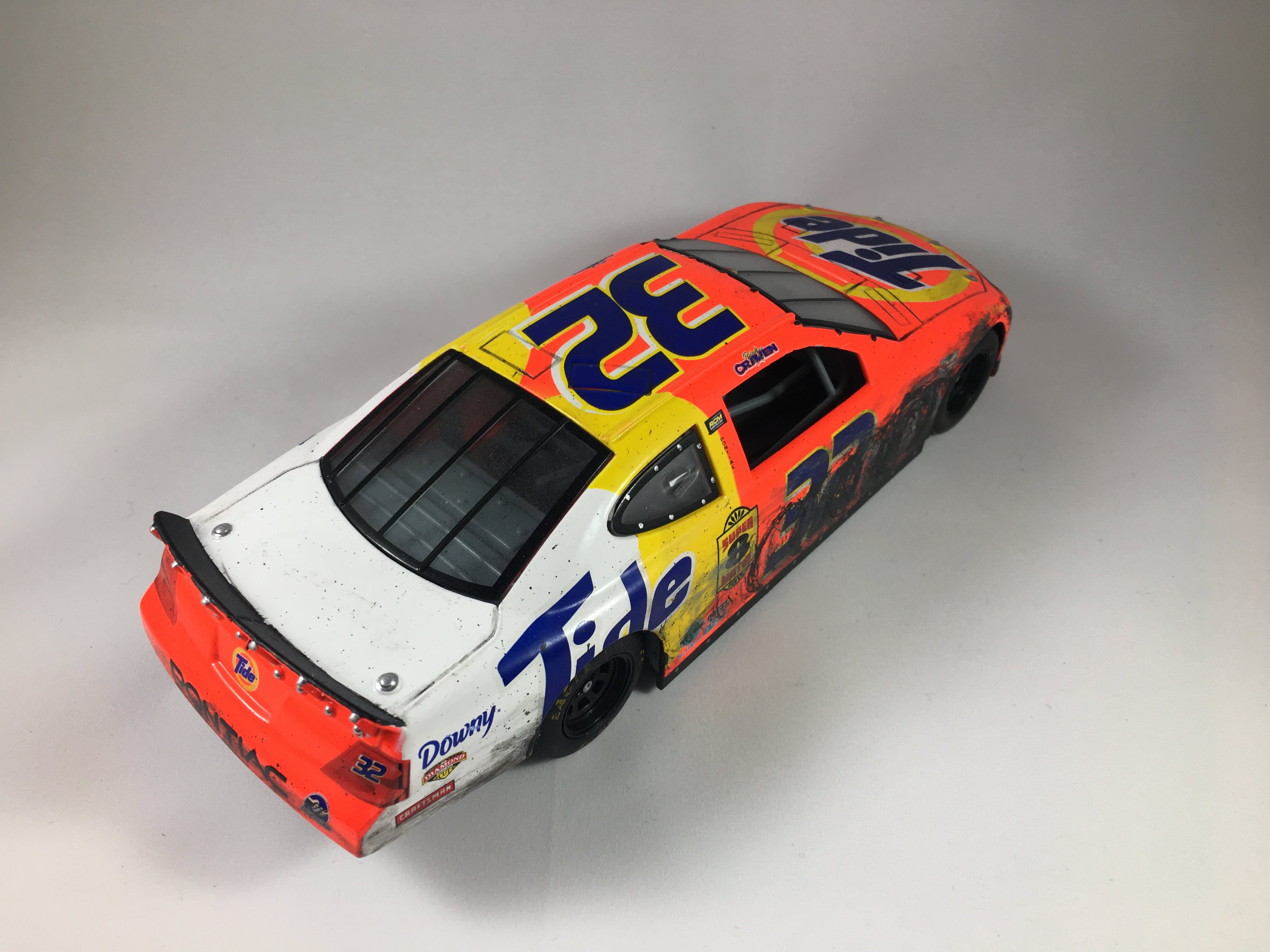 As I finish more projects I'll add them to this post.

very cool Baker Olds - well done! I like the customization on the diecasts as well and sure brings back some memories..

Keep these coming Jake. I really like what you do with the. diecasts.
SUMUS QUOD SUMUS

The Olds looks very nice, great job!
I have few of these in the stash, and this is the first one I've seen built.
Looking forward to future releases now.
The diecasts have come up great too, good to see the battle scars on models..
Well done!

Looks good, I forgot how aggressive the Pontiacs were before they left.

Updated with pics of the Terry Labonte Monte Carlo I just finished! 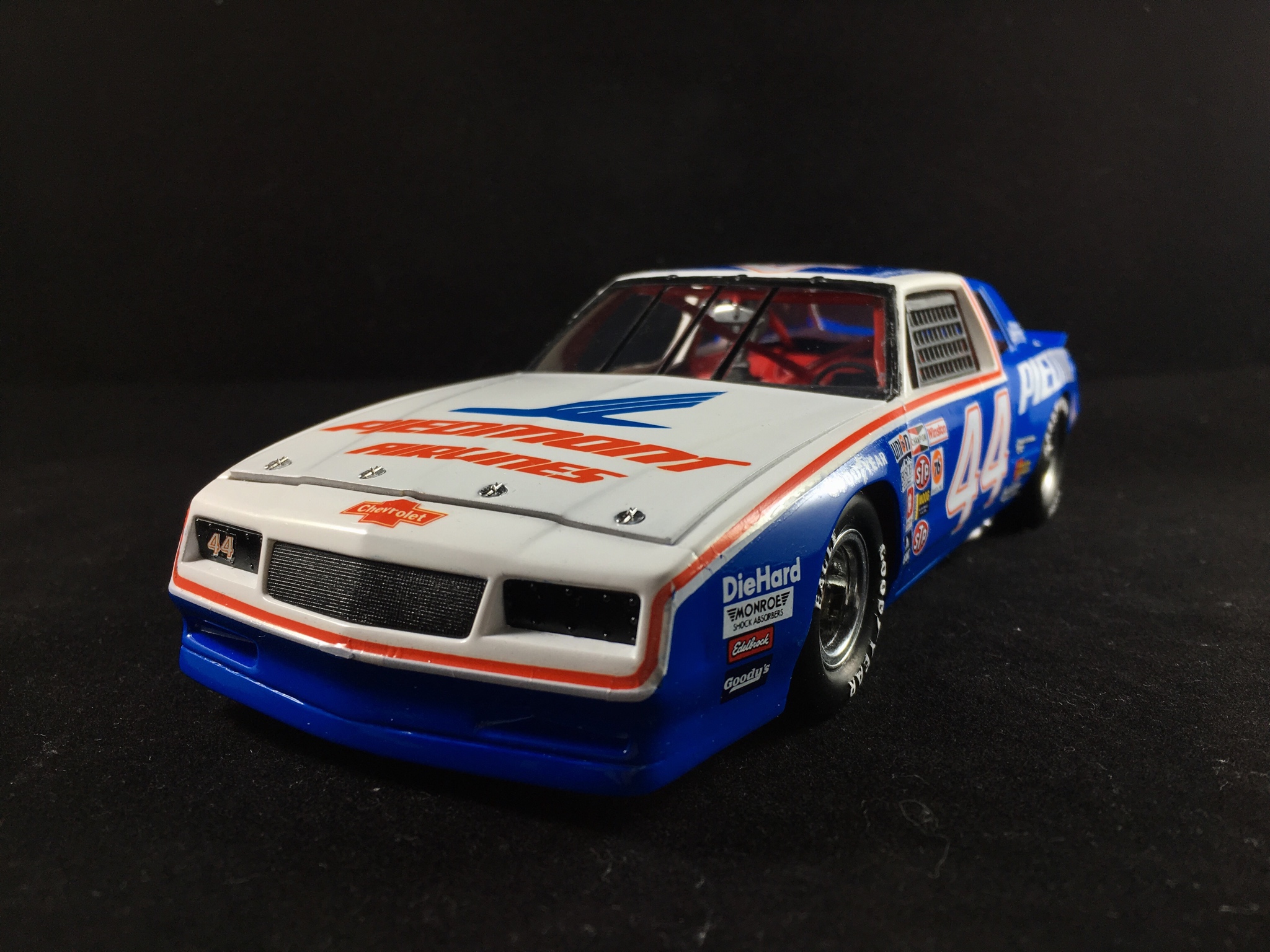 Updated to include this Bobby Allison build! 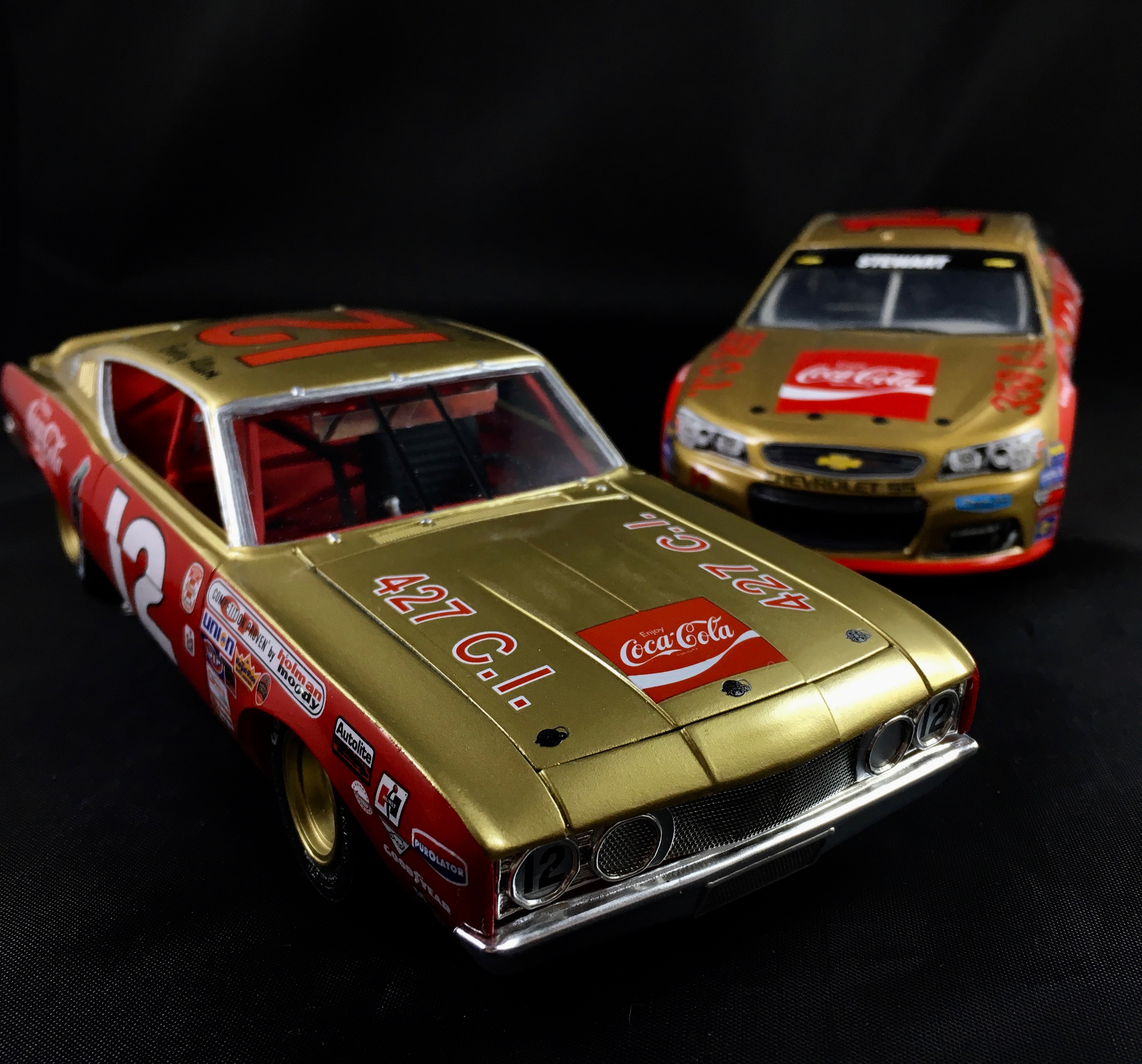 There are currently 8 users online.